Description:  Melissa Francis was eight years old when she won the role of a lifetime: playing Cassandra Cooper Ingalls on the world’s most famous prime-time soap opera, Little House on the Prairie.

Now, in the trade paperback of her wildly popular LESSONS FROM THE PRAIRIE: The Surprising Secrets to Happiness, Success and (Sometimes Just) Survival I Learned on America’s Favorite Show (Hachette Books; paperback on-sale April 3rd, 2018), Melissa shares behind-the-scenes stories from the set, along with inspirational and practical life lessons learned throughout her career. With a refreshing take on being a busy mom, Melissa offers her own mantra on how to balance everything: “Don’t ‘Lean In.’ In fact, sit down and take a load off!”

“I’ve taken more than a few pies to the face,” says Melissa,now a Fox News anchor. “Along the way, I’ve come to realize that many of the tools I needed to clean myself up, I learned in those few precious years on the Prairie. Read along and you’ll get the benefit of the laughs and lessons, without the whipped cream.”

A hilariously candid and brilliantly effective self-help book, Melissa shares her five-step recipe for turning disaster into golden opportunity, the critical upside of staying positive (nice guys/gals finish first!), how she wrangles the demands of motherhood with a full-time career (figure out what you really want), the role of faith (miracles do happen!), and how she’s learned not to care what anyone else thinks (show them your cellulite!)—all while peeling back the curtains on the legendary Little House series.

Melissa keeps readers laughing as she details her less-than-glamorous road into television journalism, revealing her tricks to break into the industry and how she finally got her big break—only to blow it and get fired! That’s when she learned her most powerful lesson: how to turn disaster into a golden opportunity. She shares those brilliant but easy steps in these pages. Building on her own experiences and the life lessons she’s learned over the years, Francis offers readers advice on resiliency, reinvention, and most of all the ability to laugh heartily at your own flaws.

Whether you’re a fan of her television work past or present, you’ll roar at Melissa’s unique brand of self- deprecating humor and walk away from Lessons from the Prairie with the tools to lead a happier and more successful life.  (publisher)

My take: Melissa Francis shares her road to becoming a television journalist in her memoir Lessons From The Prairie – now out in paperback. I missed the Little House on the Prairie series because I was in college and then a young mom during those years. I’ve watched grown-up Melissa Francis on the business channel she currently works for and find her way of explaining economic information to clear and concise. I don’t read many celebrity memoirs but I found hers to be entertaining and informative and appreciated her candor. I thought her easy writing style made her relatable – especially early on when she sought her first post-graduation job. Lessons From The Prairie is a ‘how I did it’ memoir that I can recommend.

Broadcast journalist Melissa Francis is the author of the acclaimed memoir, Diary of a Stage Mother’s Daughter. She is an anchor on Fox News Channel and Fox Business Network, and a regular contributor on financial, economic, and political issues on shows such as The Five, Outnumbered, Happening Now, and America’s Newsroom, among others. As an actress, she appeared in numerous motion pictures, television series, and more than a hundred television commercials; she is best known for her role as Michael Landon’s daughter, Cassandra Cooper Ingalls, on Little House on the Prairie. She earned a Bachelor of Arts degree in economics degree from Harvard University and lives in Manhattan with her husband and their three children. 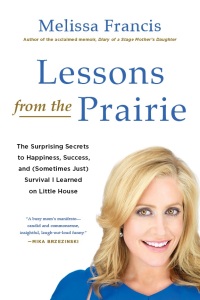 LESSONS FROM THE PRAIRIE by Melissa Francis

Praise for Lessons from the Prairie

“Melissa Francis’s Lessons from the Prairie is a busy mom’s manifesto—candid and commonsense, insightful, laugh-out-loud funny. A refreshing reality check for working moms who love their jobs as well as their families, and won’t compromise their happiness.” — Mika Brzezinski, bestselling author of Knowing Your Value and co-host of “Morning Joe”

“Touching and brave, heart breaking and inspirational…I simply loved it.” “Melissa Francis’ Lessons from the Prairie delivers one belly laugh after another as she tees up an easy to follow, step-by-step guide to tackling the toughest challenges that dog each of us. She charmingly turns personal disasters into hilarious anecdotes that will seem all too familiar to every reader, then follows with a clever take away to make your life happier. What a fun way to share the wisdom she gained growing up before our eyes on the Prairie.” — Megyn Kelly, NBC News anchor