Title:  Slim To None

About:  (Goodreads synopsis) Abbie Jennings is Manhattan’s top food critic until her expanding waistline makes staying incognito at restaurants impossible. Her cover blown on Page Six of the New York Post, her editor has no choice but to bench her—and suggest she use the time off to bench-press her way back to anonymity. Abbie’s life has been built around her career, and therefore around celebrating food. Forced to drop the pounds if she wants her primo gig back, Abbie must peel back the layers of her past and confront the fears that have led to her current life.

My thoughts:  Abbie Jennings is a character after my own heart. Abbie has struggled with her weight all her life. When she’s forced to address it yet again after losing her restaurant critic job she realizes eating too much might be the least of her issues.

Jenny Gardiner gives us a character to relate to and cheer for in this breezy, entertaining, and at times emotional novel. Feeling a bit like a silent partner lately, Abbie’s loving and patient husband gives her some space and time alone to work on things. On her own Abbie deals with the challenges of a dieter as she attempts to get to the core of her issues. She also tries to figure out why she’s so reluctant to have children when her husband has wanted to start a family for a while.

A side story involving a homeless man winds through Slim To None – I thought it would make a good separate novel but here it helps to bring Abbie’s story to a satisfying conclusion. Recommended. 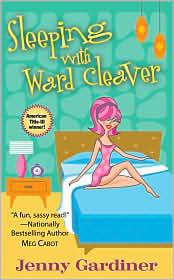 About: (From the book blurb): Not-so-happily married to Jack-once the man of her dreams but now a modern-day version of the bossy, dull Ward Cleaver of ’50s sitcom fame-Claire is at the end of her rope. Gone are the glorious days of flings in elevators and broom closets. Jack? All he needs is a cardigan and a billowing pipe to become the domineering father figure Claire never wanted. And looking at her body in the mirror, Claire would cast herself as Lumpy. They’d once had a world of color, of wanton frivolity. Now, life’s black and white: a sitcom in reruns. A not-very-funny sitcom. Cue an old boyfriend-the “one that got away”-throw in a predatory hottie who’s set her sights on our leading man, and watch Claire’s world spiral out of control.

Thoughts: For the most part it’s laugh out-loud-funny but I also had a lump in my throat during a lot of it. Jenny Gardiner’s novel cuts right to the core of a marriage that has lost its luster. The novel is written from the wife’s perspective. Claire is feeling unappreciated and the same could be said for her husband.   There’s a lot of truth about marriages “of a certain number of years” in Sleeping with Ward Cleaver.

Source: I bought it.

Why I Chose: A few bloggers I trust gave it good reviews.

Recommend?  This is a fast read that I recommend to fans of funny, honest, and entertaining novels about marriage. It’s one I’ll pass on to my sisters.