Only Time Will Tell (audiobook) by Jeffrey Archer 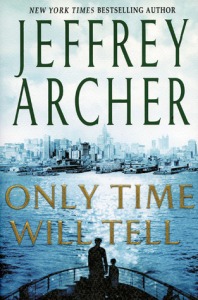 Title:  Only Time Will Tell

About:  (from the publisher)  The epic tale of Harry Clifton’s life begins in 1920 with the words “I was told that my father was killed in the war.” A dock worker in Bristol, Harry never knew his father, but he learns about life on the docks from his uncle, who expects Harry to join him in the shipyard once he’s left school. But then an unexpected gift wins him a scholarship to an exclusive boys’ school, and his life will never be the same again.

As he enters into adulthood, Harry  finally learns how his father really died, but the awful truth only leads him to question, was he even his father?

My take:  Only Time Will Tell is the first book by Jeffrey Archer that I’ve read. He used familiar themes (no spoilers here!) to tell an entertaining tale.

From the opening pages the reader is taken on a journey that moves from the Bristol shipyards to posh private schools to the high seas. The story is told from various perspectives which serves to not only tell how each main character viewed the same major events in the novel but also leaves no question as to what transpired.

Archer filled the book with heroes and villains (interesting characters all). I especially liked the character Old Jack Tarr. He was an advisor of sorts to Harry as he grew up and Harry helped Jack return to the world he’d left years earlier. I enjoyed Only Time Will Tell and, after the cliffhanger ending, look forward to the next book in The Clifton Chronicles. 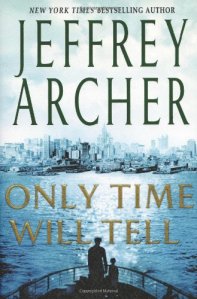