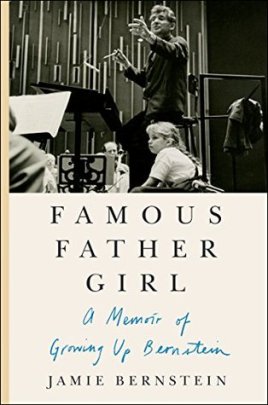 Description:  The oldest daughter of revered composer/conductor Leonard Bernstein offers a rare look at her father on the centennial of his birth in a deeply intimate and broadly evocative memoir.

An intoxicating tale, Famous Father Girl is an intimate meditation on a complex and sometimes troubled man, the family he raised, and the music he composed that became the soundtrack to their entwined lives. Deeply moving and often hilarious, Bernstein’s beautifully written memoir is a great American story about one of the greatest Americans of the modern age. (from the publisher’s description)

My take: One of my first memories of listening to music was when my mother played her beloved West Side Story soundtrack. I was mesmerized by it years before I saw the film version. Many decades later it remains one of my favorite musicals. For that reason I couldn’t wait to read Famous Father Girl. I wanted to learn what it was like to grow up the daughter of Leonard Bernstein. I wasn’t disappointed by this memoir. In college I earned a music degree and, along the way, I learned why I loved Bernstein’s music – the rhythm, orchestration, the emotions it evoked. Jamie Bernstein tells the story of her larger than life father and his effect on his family. I enjoyed the photos scattered throughout and was unsurprised by mentions of notable names of the era. Readers who grew up during the mid 20th century will recognize most if not all. As in any life well lived there are triumphs and disappointments. The Bernstein family experienced all. I think there could be a surprise or two for readers but I also think fans of the maestro and the memoir genre will be happy with Jamie’s efforts.