Fly Away by Kristin Hannah

Thanks to all who entered the giveaway!

Thanks to all who entered the giveaway! 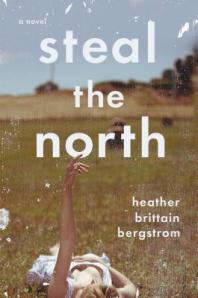 Vocally graceful and fearlessly intimate, STEAL THE NORTH (Viking; On-sale: April 14, 2014; $27.95; ISBN: 9780670786183), Heather Brittain Bergstrom’s debut novel, is a striking portrait of modern identity, faith, family, and love in all of its forms. The story, which Bergstrom deftly narrates in various voices, centers around Emmy, a California teen who discovers her mother’s past, the family she never knew she had, and an extraordinary love in the land of her birth, eastern Washington state. With atmospheric prose and engaging characters, Bergstrom has delivered a novel that will appeal to literary and commercial fiction readers alike.

Emmy Nolan is a sheltered and introverted sixteen-year-old living in Sacramento with her mom, Kate, when a phone call comes from an aunt she never knew existed. Fifteen years earlier, Kate had abandoned her only sibling, Beth, fleeing their tiny eastern Washington town and the fundamentalist Baptist church that had condemned her as a whore. Beth, who’s pregnant for what she knows is the last time after countless miscarriages, believes her only hope for delivering the baby is Emmy’s participation in a faith healing ceremony.

Emmy reluctantly goes. Despite uncovering her mom’s desperate and painful past, she soon finds she has come home—immediately developing a strong bond with her Aunt Beth and feeling tied to the rugged landscape. Then Emmy meets Reuben Tonasket, the Native American boy who lives next door. Though filled with passion, their love story mirrors those of the generation before them, who fear that their own mistakes are doomed to repeat themselves in Emmy and Reuben.

STEAL THE NORTH is an imaginative and deeply felt debut, one whose characters live at a nearly intolerable level of vulnerability. Yet, as fragile as they may seem, Bergstrom has imbued them with a tremendous inner strength, proving that the idea of home is a spiritual one, that getting over the past is hope for the future, and that the bond between family is truly unbreakable. Reminiscent of Sara Gruen, Sue Monk Kidd, and Ann Patchett, Heather Brittain Bergstrom is a  remarkable new voice in contemporary fiction.

“Bergstrom’s magnetic debut resonates on several levels, but first and foremost it is a poignant story of the love between two mismatched teens… The reader becomes involved in this thoroughly engaging first novel’s denouement because of how perceptively Bergstrom has drawn her central characters.” —Booklist

“A strong debut… The book is far more than a story of love or belief, and its layers are peeled away as the narrative progresses. Bergstrom takes the reader so deeply into the characters.” —Publishers Weekly

About the author:  Heather Brittain Bergstrom has won fiction awards from The Atlantic Monthly, The Chicago Tribune, Narrative Magazine and others, and a story was named a distinguished and notable story for The Best American Short Stories in 2010. Her short fiction has been published in several literary journals and anthologies. She holds an MFA in Creative Writing. She is from eastern Washington and now resides in northern California. For more info check out her website at http://heatherbrittainbergstrom.com.