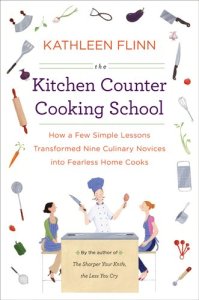 About: (back of arc) After graduating from Le Cordon Bleu in Paris, writer Kathleen Flinn returned with no idea what to do next, until one day at a supermarket she watched a woman loading her cart with ultra processed foods. Flinn’s “chefternal” instinct kicked in: she persuaded the stranger to reload with fresh foods, offering her simple recipes for healthy, easy meals.

Inspired, Flinn rounded up nine novices from varying backgrounds who were insecure about their cooking skills. After kitchen “makeovers” and a series of basic cooking lessons where they learned to wield knives, trust their taste, and improve their food choices, the women found a common missing ingredient – confidence.

My take:  I wish I’d had this book when my kids were young. I think I would have made more informed choices instead of opting for convenience. My food choices have been better over the years but there’s still room for improvement. This book is going on my kitchen bookshelf for quick reference. I’m also going to search out a knife skills class in my area. That seems to be the one aspect that all nine students valued most. It gave them confidence. Flinn explains what to look for in a chef’s knife: how it’s made, how it should feel in your hand, etc.

There are basic recipes scattered throughout the book and I plan to try most of them. After reading about specific lessons I feel like I can braise meats, make soups, sauces, vinaigrettes, and cut up or roast a whole chicken. Seriously, I have never roasted a whole chicken – but I will now! That’s a testament to The Kitchen Counter Cooking School – it made me feel like I could do this.

A few months after the classes ended Flinn visited the students to see how they were doing in terms of making changes in their cooking. It was interesting to see how they incorporated what they’d learned into their lives.

I recommend this book to fans of cooking, memoirs, and anyone who needs inspiration to make positive changes in the kitchen as well as the grocery store.