Description:  On the day Jennifer Green was born a pile of stones was placed alongside her scale of life…

A few were the dark gray of sorrow, but most were a pale blush color. The largest stone was the rose hue of a sunrise. That one would be placed on the scale the day she married Drew Bishop. Even more brilliant but a wee bit smaller was the pink stone glistening with specs of silver. That one would bring Jennifer a baby girl named Brooke.

The Keeper of the Scale smiled. Seeing such happiness laid out before him was pleasing to his eye.

Since the beginning of time, he and he alone has been challenged with the task of keeping each person’s scale in balance. A bit of happiness and then a small stone of sorrow, until the lives he has in his charge are measured evenly.

You might think such power is universal, but it is not. There are silver threads that crisscross the landscape of scales and connect strangers to one another. Not even the Keeper of the Scale can control the events traveling through those threads; the only thing he can do is try to equalize the balance once it has been thrown off. There is nothing more he can do for Jennifer; now he must find the thread that leads to Drew if he is to have the love he deserves.  (publisher)

My take:  When the author contacted me to read Silver Threads I wasn’t sure I should since it’s the 5th book in a series but she assured me it could stand alone. I would have to agree with Bette Lee Crosby.  Although context would enhance the experience of reading the novel I didn’t feel lost.

This is the story of Drew and Brooke, father and daughter, who find their life turned upside down when the unthinkable happens. Their life, through no fault of their own, changes overnight and they are left to move forward when they have no idea how. But they do, one step at a time. They continue to face challenges that most people would consider “worst nightmare” scenarios. They survive with hope of someday thriving in a way they used to take for granted.

Silver Threads reminded me of a fairy tale where evil lurks around some corners but good will ultimately prevail. I enjoyed Bette Lee Crosby’s story and recommend it to fans of novels with a hint of magic.

Samantha from Reader’s Favorite raves, “Crosby writes the type of book you can’t stop thinking about long after you put it down.”

“Storytelling is in my blood,” Crosby laughingly admits, “My mom was not a writer, but she was a captivating storyteller, so I find myself using bits and pieces of her voice in most everything I write.”

It is the wit and wisdom of that Southern Mama Crosby brings to her works of fiction; the result is a delightful blend of humor, mystery and romance along with a cast of quirky charters who will steal your heart away. Her work was first recognized in 2006 when she received The National League of American Pen Women Award for a then unpublished manuscript. She has since gone on to win nineteen awards for her work; these include: The Royal Palm Literary Award, the FPA President’s Book Award Gold Medal, Reader’s Favorite Award Gold Medal, and the Reviewer’s Choice Award. 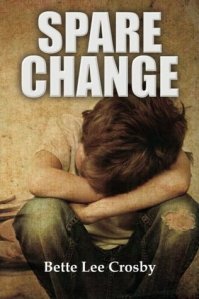 Synopsis:  A Woman who is Superstitious to the Core…
A Boy who claims his Parents are Dead…
A Murderer who wants to Silence the Truth of What Happened.

Olivia Westerly knows what she knows—opals mean disaster, eleven is the unluckiest number on earth and children weigh a woman down like a pocketful of stones. That’s why she’s avoided marriage for almost forty years. But when Charlie Doyle happened along, he was simply too wonderful to resist. Now she’s a widow with an eleven-year-old boy claiming to be her grandson…

With a foul mouth, dark secrets and heavily guarded emotions, Ethan Allen Doyle is not an easy child to like. He was counting on the grandpa he’d never met for a place to hide, but now that plan is shot to blazes because the grandpa’s dead too. He’s got seven dollars and twenty-six cents, his mama’s will for staying alive, and Dog. But none of those things are gonna help if Scooter Cobb finds him.

My take:  Set in 1950s Virginia, Spare Change is the story of Ethan Allen Doyle, a young boy who is truly a victim of his circumstances. He’s a child of selfish and bitter parents who treat him pretty much as insignificant baggage. He learns early on how to survive and make do. It was easy to cheer for him. As dark as his life seemed, it grew much darker on one particular day.

Life changed for Ethan Allen and it soon changed for Olivia, his grandfather’s widow, in ways that would prove to be challenging as well as life-affirming. They both learned that if you have love in your life you can look evil in the eye and triumph.

I’m so glad the author asked me to read her novel. A classic tale of good vs. evil, it’s a page turner to be sure. Spare Change is filled with memorable characters that add humor and compassion. From the weary detective to the residents of Olivia’s apartment complex, I enjoyed them all.  Recommended.

Disclosure: I received a review copy from the author. I was not compensated for my review.