Another week of indoor walking. I try not to wish time away but Spring can’t arrive soon enough. Hoping all my New England friends are well and have dug out from the blizzard. You’ve been in my thoughts.

Read on the treadmill:

Synopsis:  When Viscount Avery comes to see an invalid chair maker, he does not expect to find Min Bradshaw, the woman who rejected him 3 years earlier. Or did she? He wonders if there is more to the story. For 3 years, Min Bradshaw has remembered the handsome guardsman who courted her for her fortune. She didn’t expect to see him in her workshop, and she certainly doesn’t intend to let him fool her again.  (author)

My take:  When author Jude Knight let me know her novella was free on Amazon I checked it out and promptly downloaded it to my Kindle. I enjoy historical romances and love when there’s a Christmas theme.

Candle is a nickname for Viscount Randall Avery. He’s quite tall and has red hair, hence the nickname. He met Minerva at a house party three years ago and couldn’t forget her even though it seemed she wanted nothing more to do with him. Min had been told, by an unreliable source it turns out, he only wanted her for her money. She quickly left the party without saying goodbye. What a shock for both when they met again in Min’s workshop. Candle was there to order a wheelchair for his mother.

Min was determined not to get involved with Candle. The differences were too much to overcome – he a peer and she a shopkeeper’s daughter. Candle took that as a challenge and set to work at winning Min’s heart and trust. This part was so charming that I don’t want to spoil it for other readers except to say I learned quite a bit about the language of flowers. I also found the wheelchair aspect of the novella quite interesting.

Knight included a bit of drama that I was happy didn’t go down a predictable road. I enjoyed this novella and recommend it to fans of the author and historical romance.

Note:  Check Jude Knight’s website for buy links for various retailers and to read about her other books. 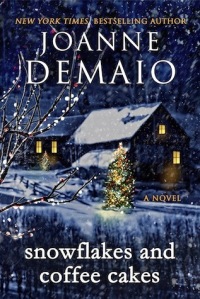 Synopsis:  Reluctant to leave her cherished New England hometown after her sister’s winter wedding, former journalist Vera Sterling makes a sudden decision. She takes what’s left of her severance pay and invests it in real estate … in one particular drafty colonial home and old timber barn set upon the pretty banks of Addison Cove. In that rough-hewn barn, she discovers a secret treasure left behind by the previous owner, the proprietor of the long-forgotten Christmas Barn gift shop.
While restoring her rundown, wood-sided home–its creaking floors, broken bannister, and neglected widow’s walk–that secret slowly unfolds like a bit of snowflake wonder, crystallizing hopes and dreams for many in this small Connecticut town. But mostly for Derek Cooper whose own tragic story has headlined Addison’s news. And whom Vera has come to love.
When the first snowstorm hits during Derek’s annual Deck the Boats Festival at the cove, residents become stranded. It is then up to Vera to not only bring the town together, but to mend one man’s heart she fears she may have lost.  (book synopsis)

My take:  Joanne DeMaio takes us back to Addison, a quaint Connecticut seaside town that you’ll want to visit (maybe even move to) after you read this charming tale. People in Addison are just like you and me. They experience life’s joys and sorrows and support each other along the way.

When Vera buys the fixer-upper Dutch Colonial she gets to know Derek who works at his family’s hardware store. He also fixes things – like stuck doors, broken steps, etc. Derek and Vera strike up a friendship that soon becomes more. There’s an easiness about them that lets them talk about anything – including the reason for Derek’s heartache. He appreciates how direct she is without being uncomfortable when talking about it. But one day when Derek misunderstands something he hears about Vera it drives a wedge between them. Vera doesn’t understand what’s wrong – until she does. She’ll have to prove to Derek she’s not going anywhere.

I like a novel that gets me invested in the characters’ lives and relationships and has an emotional impact. That was my experience with this book. Plus, it really put me in the Christmas spirit! I enjoyed Snowflakes and Coffee Cakes and look forward to my next visit to Addison. My thanks to Joanne DeMaio for this lovely Christmas story.

about friendship, family, love and choices, while setting her stories in New England towns or by the sea. Her novels include the New York Times bestseller Blue Jeans and Coffee Beans, Whole Latte Life, which was named a Kirkus Reviews Critics’ Pick, and most recently Snowflakes and Coffee Cakes. Joanne lives with her family in Connecticut and is currently at work on her next book. To learn more, visit Joannedemaio.com.

Maggie Lee’s a lot of things:

The daughter of a mom in a mental institution and a dad serving time;
The niece of three meddling aunts;
The aunt (and now legal guardian) of her beloved niece, Katie;
The friend of a snarky lizard, a dyslexic Doberman, and a semi-psychic co-worker;
A contract killer.

But one thing she’d never thought she’d be is a thief.

That’s about to change as she heads to the casinos of Atlantic City to
help her sexy murder mentor, Patrick Mulligan, steal something from a professional thief.

Maggie’s never been lucky in love or money. Will this gamble pay off or will she lose her shirt, her heart or even her life?

My take:  The Hitwoman Gets Lucky is a fun novella to tide fans of the Slightly Neurotic Hitwoman series over until the next novel in the series is published (soon, I hope).

Maggie trusts her mentor, Patrick Mulligan, so she doesn’t think twice when he asks her to help him with a job in Atlantic City. It just so happens that she has tickets to a Barry Manilow concert and was planning to go anyway. So she and her good friend Armani (who is unaware of Mulligan’s job) head off to AC with Maggie’s lizard along for the ride because he really didn’t want to stay home alone. It’s always a fun time for the reader when Godzilla (or god as he likes to be called) makes an appearance. He finds himself making quite an unexpected appearance during the job. That’s all I’ll say about that or the rest of the plot 🙂 You’ll have to read to find out. It’s a quick, fun read that made my time on the treadmill go by in a flash.

This novella is #2.5 in the series. Although it can be a stand alone I recommend you start with the first book (Confessions of a Slightly Neurotic Hitwoman) because you don’t want to miss learning how Maggie became a hitwoman.