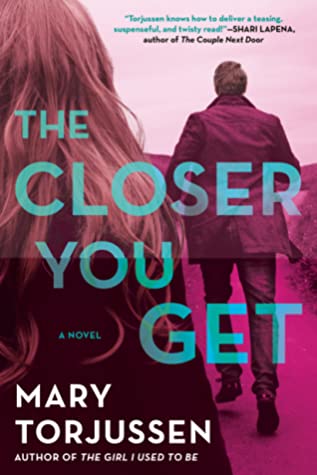 The Closer You Get by Mary Torjussen

Book provided by the publisher; NetGalley

Coworkers Ruby and Harry are in love—but they’re married to other people. They decide to tell their spouses that their marriages are over and to start a new life together. Ruby has wanted to leave her controlling husband for a while, so she tells him she’s leaving and waits at the hotel where she and Harry are to meet. But Harry never shows up.

Suddenly, Ruby has lost everything. Harry won’t answer her calls, and she’s fired from her job. She finds a cheap apartment in a run-down part of town, all the while wondering what happened to Harry.

Just as Ruby thinks she’s hit rock bottom, strange and menacing things start to happen—someone is sneaking into her apartment, and someone is following her home late at night—and she is going to have to fight for her survival. (publisher)

My take:  I like a domestic suspense from time to time and thought The Closer You Get sounded like a good one. There are Ruby and Tom. She’s become a bit of a doormat and he’s emotionally abusive. It was easy to see why Ruby would find Harry a reason to leave her marriage. There are Harry and Emma. They’ve been married for years and things have grown stale. He’s quite taken with Ruby when she comes to work at his company. They have a plan to be together but somehow things go wrong and Ruby ends up alone. The novel moves between Ruby and Emma’s POV. I liked that just when I thought I knew how things would play out the author threw a curve ball and the story went down a new path. I appreciated the nod to Gaslight – a film I now want to see again after many decades. All told, The Closer You Get is a fast paced, suspenseful novel that I read in a couple of days. I’ll definitely look for Mary Torjussen’s previous books.

9 thoughts on “The Closer You Get”