Skip to content
HomeA Bookshop in Berlin by Françoise Frenkel 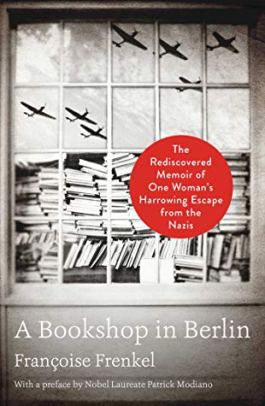 A Bookshop in Berlin by Françoise Frenkel

Book courtesy of Atria and NetGalley

Françoise’s dream finally shatters on Kristallnacht in November 1938, as hundreds of Jewish shops and businesses are destroyed. La Maison du Livre is miraculously spared, but fear of persecution eventually forces Françoise on a desperate, lonely flight to Paris. When the city is bombed, she seeks refuge across southern France, witnessing countless horrors: children torn from their parents, mothers throwing themselves under buses. Secreted away from one safe house to the next, Françoise survives at the heroic hands of strangers risking their lives to protect her.  (publisher)

My take:  A Bookshop in Berlin is the first hand account of Françoise Frenkel and her life leading up to and including the WWII years. With WWI behind them she and her husband left Paris and opened the first French bookshop in Berlin in 1921. He eventually went into exile in France (was later rounded up and died in Auschwitz-Birkenau, Poland) while she stayed behind to run the shop. After Kristallnacht she fled Berlin for France and was eventually rounded up while trying to enter Switzerland. Her experiences were difficult to read but, at the same time, riveting. Not all people had her strength and determination but many did. It’s an amazing story that I’m glad I had the chance to read. Recommended to fans of memoirs of this era. I appreciated the documents and photos included at the end of the book.

Françoise Frenkel was born in Poland in 1889. Her memoir, originally published in 1945 as Rien où poser sa tête (No Place to Lay One’s Head), was rediscovered in an attic in southern France in 2010 and republished in the original French as well as in a dozen other languages. This is its first publication in the United States. Frenkel died in Nice in 1975.

7 thoughts on “A Bookshop in Berlin by Françoise Frenkel”