Skip to content
HomeSpotlight/US Giveaway: The Passengers by John Marrs 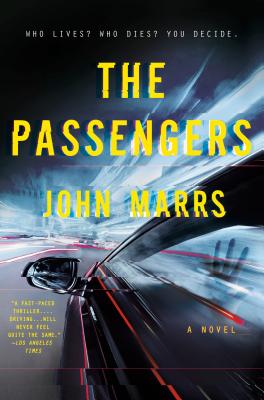 The Passengers by John Marrs

The headlines have made it known:  driverless cars are coming. And soon. As author John Marrs has put it:  “Whether we like it or not, there are arriving soon. Within the next decade, we will be sitting in the front seats of our vehicles with a flat dashboard containing no steering wheel, and below us, no brakes. We will be in the hands of an operating system that we cannot touch and that we cannot see. It will be making life or death decisions for us. But what if that artificial intelligence could be compromised? What if it is hacked and something – or someone – other than the OS is controlling our destiny?”

Marrs takes that idea and hits full speed in THE PASSENGERS. In it, the British government has mandated all cars be automated. Several years into their implementation, on a seemingly average day, eight people get into their self-driving cars. Suddenly on their journey, the doors lock and the pre-determined route changes. The riders have lost all control. A mysterious voice tells them, “You are going to die.”

These passengers—an aging actress, a pregnant young woman, an abused wife fleeing her husband, an illegal immigrant, a husband and wife, and a suicidal man—are panicked. From cameras hidden in their cars, their frantic pleas for help are broadcast to millions of people around the world. The public will show their true colors when they are asked, “Which of these people should we save? Who should we kill first?”

The passengers desperately plead for the lives and sell themselves to the cameras blasting this onto social media. But it soon becomes apparent most of these passengers haven’t been picked randomly. They are all hiding secrets that, once revealed, could be the difference between life and death for each of them.

John Marrs is the author of The One which is being made into a 10 part Netflix series, The Good Samaritan, Her Last Move, When You Disappeared, and Welcome to Wherever You Are. Until recently, he worked for twenty-five years as a freelance journalist based in London, England, where he interviewed celebrities from the world of television, film, and music for national newspapers and magazines. He has written for publications including the Guardian’s Guide and Guardian Online, Total Film, the Huffington Post, Empire, Q, GT, the Independent, S Magazine, and Company. He is now a full-time author.

Praise for THE PASSENGERS:

“THE PASSENGERS is a 1970s disaster movie by way of Black Mirror, with an added dash of technology-gone-wrong straight out of Michael Crichton….If you’re looking for a sleek, exhilarating ride, look no further.”— Financial Times

“One can almost hear the Hollywood music in the background as the action unfolds; the plot twists are truly gripping….Summer blockbuster entertainment at its best.”— Kirkus Reviews

“[THE PASSENGERS’s] strength lies in its well-developed characters and in its exploration of issues such as the growing role of AI, mob psychology, and the ethics of who gets to decide who lives or dies.”— Publishers Weekly

“Marrs excels at thrilling readers by creating a real sense of tension and delivering a believable, harsh criticism of modern society through this dark and entertaining story.” —Los Angeles Times

4 thoughts on “Spotlight/US Giveaway: The Passengers by John Marrs”