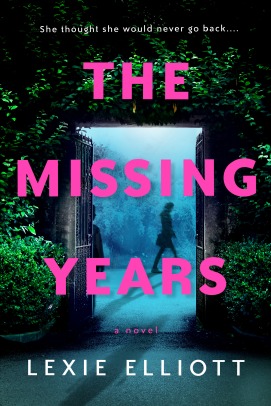 The Missing Years by Lexie Elliott

Review copy provided by the publisher

Description: An eerie, old Scottish manor in the middle of nowhere that’s now hers.

Ailsa Calder has inherited half of a house. The other half belongs to a man who disappeared without a trace twenty-seven years ago—her father.

Leaving London behind to settle the inheritance from her mother’s estate, Ailsa returns to her childhood home, nestled amongst the craggy peaks of the Scottish Highlands, joined by the half-sister who’s almost a stranger to her.

Ailsa can’t escape the claustrophobic feeling that the house itself is watching her—as if her past hungers to consume her. She also can’t ignore how the neighborhood animals refuse to set one foot within the gates of the garden.

When the first nighttime intruder shows up, Ailsa fears that the manor’s careless rugged beauty could cost her everything.  (publisher)

My take:  I hope you read the description above because I can’t describe it any better. What drew me to this book was the setting and the aspect of a house being one of the characters. The Manse, as it is referred to by everyone, has quite the personality! I wondered more than a few times why the book wasn’t titled “The Manse“.

There are a few mysteries waiting to be solved by Ailsa. What really happened to her father all those years ago? What is going on regarding the animals? What’s up with her neighbors? I didn’t know who was worthy of her trust and neither did she. That’s what kept me turning the pages – especially in the first half of the novel when the pace felt a bit too slow. Still, I’d recommend The Missing Years to fans of mysteries with gothic overtones and possible time slips. It is Scotland, after all. 🙂

Lexie Elliott grew up in Scotland, at the foot of the Highlands. She graduated from Oxford University, where she obtained a doctorate in theoretical physics. A keen sportswoman, she works in fund management in London, where she lives with her husband and two sons. The rest of her time is spent writing, or thinking about writing, and juggling family life and sport.