Skip to content
HomeMurder at the Mill by MB Shaw: Excerpt and US Giveaway 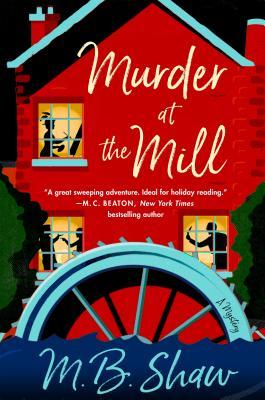 Iris Grey rents a quaint cottage in a picture-perfect Hampshire village, looking to escape from her crumbling marriage. She is drawn to the neighboring Wetherby family, and is commissioned to paint a portrait of Dominic Wetherby, a celebrated crime writer.

At the Wetherby’s Christmas Eve party, the mulled wine is in full flow – but so are tensions and rivalries among the guests. On Christmas Day, the youngest member of the Wetherby family, Lorcan, finds a body in the water. A tragic accident? Or a deadly crime?

The sound of the water was deafening. This stretch of the River Itchen was narrow, little more than a stream in places, but it was deep, and the current was fast, causing the ancient waterwheel to churn and splash and creak with unexpected ferocity, like a battlefield’s roar. Somewhere in the distance, church bells were pealing, fighting theirway through the din. Five o’clock. As good a time to die as any.

Tying on the stone was easy, despite the darkness and the noise and the cold that numbed one’s fingers. Everything had been easy, in fact. All that fear, the stomach-souring anticipation of the act, had been for nothing in the end. Everything had gone exactly according to plan. So far, anyway. There was a symmetry to that, at least, the satisfaction of a job well done. One could even call it a pleasure of sorts.

Across the bitterly cold water, the lights of Mill House glowed warm and inviting. Through the sash windows of the Wetherbys’ grand draw- ing room, a Christmas tree twinkled. Gaudy and colourful, rising out of a shiny sea of discarded wrapping paper, torn from joyously opened gifts, it had clearly been decorated by children, as all Christmas trees should be.Few things in life were sadder than an ‘adult’ Christmas tree, tastefully decked out in themed colours. Where was the magic in that?

The water was as cold as stone, cold enough to make one flinch. But only momentarily. It was time to let go. The river opened up eagerly to receive its Christmas gift, pulling it down into the familiar black depths with the cloying, greedy embrace of a lover.

On the opposite bank of the river, a torchlight danced.
Lorcan Wetherby, youngest son of the celebrated author Dom Wetherby and his wife, Ariadne, had ventured outside to play with his Christmas presents: a Scooby-Doo flashlight and a motorised toy boat, his pride and joy. Lorcan could still feel the excitement of the afternoon, when his oldest brother Marcus had pulled the big parcel wrapped in holly-sprigged paper out from under the tree. Handing out Christmas presents one by one under the tree after lunch was a family tradition, prolonging both the agony and the ecstasy for generations of Wetherby children.

‘ “To Lorcan”,’ Marcus read aloud. ‘ “Merry Christmas and all our love, Mummy and Daddy.’”

Lorcan had torn at the paper like a puppy, emitting a squeal of pure delight when he saw it. Exactly like the one on TV.

‘Remoke control!’ He beamed at his mother. ‘It’s remoke control!’ Ariadne beamed back. She adored her son. ‘That’s right, darling.’ Waiting for his father to put the batteries in and set the boat up had been torture. But after inhaling two slices of Ariadne’s homemade Christmas cake so quickly Marcus could have sworn he saw marzipan chunks coming out of his little brother’s nose, the boat was finally ready and Lorcan had raced down the sloping lawn to the banks of the Itchen to play with it.

Dark had long since fallen. Recently Lorcan had felt afraid of the dark, and particularly of ‘ghosts’, which he saw constantly, hovering around every tree or lichen-covered wall. His father, Dom, blamed it on Scooby-Doo, a new obsession. His mother wasn’t so sure.

‘I wouldn’t be too quick to dismiss it. Maybe he’s really seeing something.’

‘Like what?’ Dom Wetherby frowned. ‘Things that go “bump” in the night?’

Ariadne smiled patiently. For a writer, Dominic could be terribly unimaginative at times. ‘This house is over four hundred years old, darling,’ she reminded him. ‘There may well be ghosts here. Children like Lorcan often see things other people don’t, or can’t. Maybe he’s just more attuned to the supernatural than we are.’

Attuned or not, Lorcan wasn’t afraid tonight. He had seen a ghost as it happened, less than an hour ago, moving through the woods, white and tall and looming. But the ghost hadn’t seen him. He was too busy with whatever he had in his hands. Besides, Lorcan had his Scooby-Doo torch, it was Christmas, and he was at home at the Mill with Mummy and Daddy. He was safe. Cocooned. It was like Mummy said: ‘Ghosts are only people, Lorcan. Ordinary people. It’s just that you’re seeing them in an extraordinary way.’ Lorcan wasn’t sure what that meant exactly, but it made him feel better.

Ghosts were people.
People, in Lorcan’s experience, were nice.
He played with his boat till his hands were so cold they hurt. The church bells rang. He counted them. One, two, three, four, five . . . six. Time to go in.

Crossing at the bridge safely, where his father had shown him, he reached down gingerly to pull his boat out of the reeds. Behind him, he could hear the waterwheel turning, the familiar sound of rushing water that was the soundtrack to his life. Lorcan Wetherby loved the river. He loved it like a person. He loved the waterwheel and the Mill. He loved his home. His family.

The boat was stuck. The spiky part at the bottom – the ‘keel’, Marcus had called it – had become entangled in something, some part of the cold, watery underworld of the Itchen. Lorcan tugged harder, but still it wouldn’t budge. Carefully setting down the remote-control handset next to him on the bridge to get a better grip, he tried again, with both hands this time, plunging his arms into the frigid water right up to the elbows. Leaning back, he pulled as hard as he could, his muscles burning with exertion as he yanked and twisted the precious boat, willing it to break free.

Beneath the surface, something snapped.

A small movement at first, then a bigger one, then in one great rush up came the boat, rising out of the water like the kraken. It was still heavy, still caught up in something, but Lorcan had hold of it now, the whole, beautiful vessel safe in his two strong hands. He sat back tri- umphant and exhausted. After a few deep breaths, he began to try to unwind the slimy strands still coiled round the boat’s bottom.

And then he saw it.
It wasn’t reeds that had wrapped themselves, vise-like, round the keel. It was hair.
Human hair.
Lorcan stared down in horror into the face of the corpse, its skin stretched tight and ghoulish from being pulled by the scalp. White, sightless eyes stared back at him.

Not even the sound of the river could drown out Lorcan’s screams.

M.B Shaw is the pen-name of New York Times bestselling writer Tilly Bagshawe. A teenage single mother at 17, Tilly won a place at Cambridge University and took her baby daughter with her. She went on to enjoy a successful career before becoming a writer. As a journalist, Tilly contributed regularly to the Sunday Times, Daily Mail, and Evening Standard, before turning her hand to novels.

Tilly’s first book, ADORED, was a smash hit on both sides of the Atlantic, becoming an instant New York Times and Sunday Times bestseller. She now divides her time between the UK and America, writing her own books and the new series of Sidney Sheldon novels. 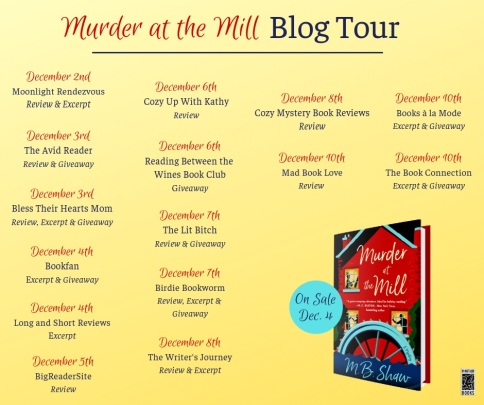 Advanced Praise for MURDER AT THE MILL and M.B. Shaw

“A rich, mystery debut… Tilly Bagshawe… makes a smooth transition to the world of puzzlers.”

“The principled, smart, and courageous Iris is bound to garner enthusiastic fans.”

“A most enjoyable and energetic cozy.”

“Complicated relationships create a strong backdrop for a complex mystery, and one hopes, the foundation for more books to come.”

“Murder at the Mill by M. B. Shaw is a great sweeping adventure.

“M.B. Shaw has penned a wonderfully layered mystery with a multifaceted amateur sleuth, artist Iris Grey. Ms. Shaw’s English village setting made me feel like I was right there, and kept me reading until late into the night. I can’t wait to see where Iris Grey’s next artistic commission takes us.”

“Be sure to start reading M.B. Shaw’s evocatively written mystery early in the day, or else you’ll be up late into the night—it’s that unputdownable.”

“A festering box of secrets, providing a Christmas cocktail of family lies and deliciously conceived murder.”

—Mandy Morton, author of The No. 2 Feline Detective Agency series

“A snowy Christmas in a country village, intriguing characters and a twisty-turny plot…I loved this book and couldn’t put it down. Fabulous!”

“A contemporary-set cosy crime novel that harks back to The Golden Age of detective fiction. Author Tilly Bagshawe writing under a pseudonym, introduces us to society portraitist Iris Grey whose Christmas country retreat is anything but when a body is found floating by the mill on Christmas Day, instead of tucking into turkey and all the trimmings, Iris finds herself caught up in all manner of sleuthing and intrigue.”

6 thoughts on “Murder at the Mill by MB Shaw: Excerpt and US Giveaway”