Congratulations to Francesca Hornak on the paperback release of her novel Seven Days of Us. If you missed reading it last year in hardcover you’ll want to pick it up now! 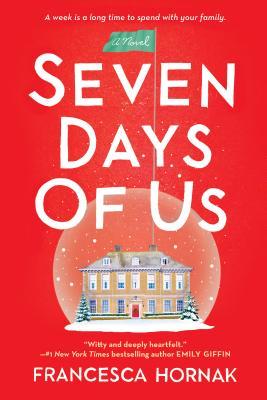 Seven Days of Us by Francesca Hornak

Publisher’s description: It’s Christmas, and for the first time in years the entire Birch family will be under one roof. Even Emma and Andrew’s elder daughter—who is usually off saving the world—will be joining them at Weyfield Hall, their aging country estate. But Olivia, a doctor, is only coming home because she has to. Having just returned from treating an epidemic abroad, she’s been told she must stay in quarantine for a week…and so too should her family.

For the next seven days, the Birches are locked down, cut off from the rest of humanity—and even decent Wi-Fi—and forced into each other’s orbits. Younger, unabashedly frivolous daughter Phoebe is fixated on her upcoming wedding, while her older sister, Olivia, deals with the culture shock of being immersed in first-world problems.

Their father, Andrew, sequesters himself in his study writing scathing restaurant reviews and remembering his glory days as a war correspondent. But his wife, Emma, is hiding a secret that will turn the whole family upside down.

In close proximity, not much can stay hidden for long, and as revelations and long-held tensions come to light, nothing is more shocking than the unexpected guest who’s about to arrive…

Seven Days of Us is an entertaining and deceptively light novel about a family. The Birches are an interesting group. Andrew, the father, is a snarky restaurant reviewer for a newspaper. Emma, the matriarch, just wants everyone to have the kind of Christmas holiday she remembers from childhood. Altruistic eldest daughter Olivia is a doctor just returned from relief work in Liberia and the reason for the family quarantine. Younger daughter Phoebe is completely self-absorbed and more than a bit annoyed at being forced to spend the holidays with her family instead of her new fiancé.

Told from the perspective of each family member, plus a couple of other characters, the chapters are short and follow a day-by-day form that made the novel easy to stop and start reading. This was also a great way to lay out the Birch family’s messy dynamics. It ended up being an emotional read for me – that was unexpected and very much appreciated. Recommended to fans of novels about imperfect families. I loved the setting(s) and the holiday-ness to which I think most readers will relate on one level or another.

Francesca Hornak is a journalist and writer, whose work has appeared in newspapers and magazines including The Sunday Times, The Guardian, Elle, Marie Claire, Cosmopolitan and Red. She is the author of two nonfiction books, History of the World in 100 Modern Objects: Middle Class Stuff (and Nonsense) and Worry with Mother: 101 Neuroses for the Modern Mama.