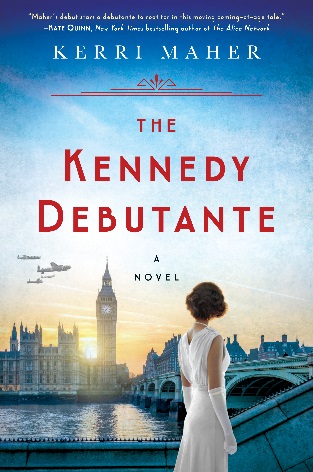 The Kennedy Debutante by Kerri Maher

Description:  London, 1938. The effervescent “It girl” of London society since her father was named the ambassador, Kathleen “Kick” Kennedy moves in rarified circles, rubbing satin-covered elbows with some of the 20th century’s most powerful figures. Eager to escape the watchful eye of her strict mother, Rose, the antics of her older brothers, Jack and Joe, and the erratic behavior of her sister Rosemary, Kick is ready to strike out on her own and is soon swept off her feet by Billy Hartington, the future Duke of Devonshire.

But their love is forbidden, as Kick’s devout Catholic family and Billy’s staunchly Protestant one would never approve their match. When war breaks like a tidal wave across her world, Billy is ripped from her arms as the Kennedys are forced to return to the States. Kick gets work as a journalist and joins the Red Cross to get back to England, where she will have to decide where her true loyalties lie—with family or with love. (publisher)

My take:  Kathleen “Kick” Kennedy’s story is the stuff that fans of PBS Masterpiece series love to watch. It begins with Kick’s debut in London and meeting a certain Billy Hartington – who will one day be the Duke of Devonshire. Sounds like a fairytale, right? They both feel the pull of family duty, tradition, and religious faith. Stronger, though, is the pull of love that develops over several years.

The Kennedy Debutante covers the days leading up to and including WWII in England as seen through the eyes of Kick and her friends and family. No one was immune from tragedy so most grabbed whatever happiness could be found – stringent family expectations were easy to ignore. It was a time for Kick to examine her own life and decide what was best for her.

I’d only heard of Kathleen Kennedy but didn’t know much about her life. I enjoyed Kerri Maher’s imagined scenarios and am eager to learn more about Kick Kennedy. Recommended to fans of all things Kennedy and historical fiction.

Kerri Maher is also the author of This Is Not A Writing Manual: Notes for the Young Writer in the Real World under the name Kerri Majors. She holds an MFA from Columbia University and founded YARN, an award-winning literary journal of short-form YA writing. For many years a professor of writing, she now writes full time and lives with her daughter in Massachusetts where apple picking and long walks in the woods are especially fine.

Advance praise for THE KENNEDY DEBUTANTE:

“American royalty takes British aristocracy by storm in The Kennedy Debutante, starring JFK’s vivacious sister Kathleen ‘Kick’ Kennedy who arrives in London on the brink of war…Kerri Maher’s debut stars a debutante to root for in this moving coming-of-age tale.”—Kate Quinn,New York Times bestselling author of The Alice Network

“An outstanding deep dive into a fascinating person and time. For fans of The Crown, the riveting story of a headstrong American girl captivated by a dashing British aristocrat. I’m blown away.”—Fiona Davis, national bestselling author of The Masterpiece

“Maher beautifully mixes the red-blooded American iconography of the Kennedys with the delicious and Downton Abbey­-esque grandeur of Britain’s upper crusts…her story will make your heart lurch in the best possible ways.”—Allison Pataki, New York Times bestselling author of The Accidental Empress