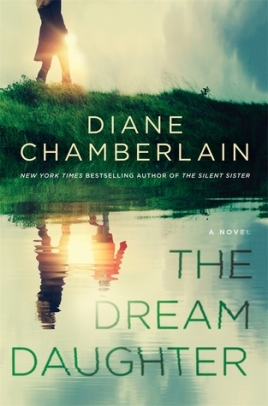 The Dream Daughter by Diane Chamberlain

Review copy from the publisher

Description:  When Caroline Sears receives the news that her unborn baby girl has a heart defect, she is devastated. It is 1970 and there seems to be little that can be done. But her brother-in-law, a physicist, tells her that perhaps there is. Hunter appeared in their lives just a few years before—and his appearance was as mysterious as his past. With no family, no friends, and a background shrouded in secrets, Hunter embraced the Sears family and never looked back.

And all for the love of her unborn child. (publisher)

My take:  What would you do to save your unborn child, the last connection to your husband who was killed in the war? Caroline (Carly) Sears’ answer is “anything”. And that is why she agrees to travel to another time to get medical help for her daughter’s heart. If she doesn’t, her baby doesn’t have much hope of survival after her birth. Carly will do whatever it takes to give her daughter a chance at life.

So the question I began with led to other questions such as could I place trust in a friend like Carly did in Hunter, her brother-in-law? Could I be as brave as Carly? Would I be able to travel alone to a place where I knew no one and then deal with life-altering issues? After finishing I don’t have an answer for every question but I would aspire to be as courageous as Carly.

Diane Chamberlain’s time-travel story is very accessible to readers who normally don’t go in for that sub-genre. That would include me! This novel is a true page turner that had me looking forward to getting back to the story whenever I had to set it down. It’s an emotional story that covers several decades from the 1960s to the 2020s. I enjoyed it all and recommend it to fans of Diane Chamberlain.

9 thoughts on “The Dream Daughter by Diane Chamberlain”