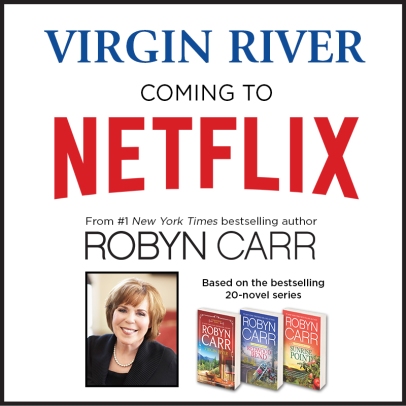 Exciting news about one of my favorite authors!

Netflix has ordered 10 episodes of Virgin River, a contemporary romance based on the beloved, 20-book Harlequin series from #1 New York Times bestseller Robyn Carr. The series has sold more than 13 million copies worldwide.

Melinda Monroe answers an ad to work as a nurse practitioner in the remote California town of Virgin River thinking it will be the perfect place to start fresh and leave her painful memories behind. But she soon discovers that small-town living isn’t quite as simple as she expected and that she must learn to heal herself before she can truly make Virgin River her home.

Robyn Carr is the author of more than 50 novels, which have sold over 28 million copies worldwide. She has written 11 #1 New York Times bestsellers. Her upcoming novel, The Best of Us, will be released on January 8th, 2019.