Skip to content
HomeSpotlight: Pieces Of Her by Karin Slaughter

Pieces Of Her by Karin Slaughter

But all that changes when a trip to the mall explodes into violence. Celebrating her birthday over lunch with her mother, they find themselves in the middle of a deadly shooting and Andrea suddenly sees a completely different side to Laura. While Andrea freezes in fear, Laura is calm, cool, and collected—jumping into action to stop the killer in his tracks. How can a quiet, middle-aged speech pathologist possibly stop a shooter on a rampage? Because it turns out that before Laura was Laura, she was someone completely different. For nearly thirty years she’s been hiding from her previous identity, lying low in the hope that no one would ever find her. But now she’s been exposed, and nothing will ever be the same.

The police want answers and Laura’s innocence is on the line, but she won’t speak to anyone, including her own daughter. Andrea is on a desperate journey following the breadcrumb trail of her mother’s past. And if she can’t uncover the secrets hidden there, there may be no future for either one of them. Told from Laura’s point of view in 1986 and Andrea’s now, PIECES OF HER begs the question, can you ever truly escape your past? (publisher) 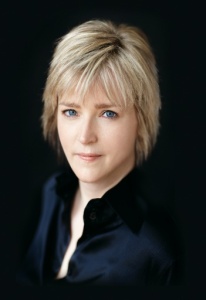 Karin Slaughter is one of the world’s most popular and acclaimed storytellers. Published in 120 countries with more than 35 million copies sold across the globe, her eighteen novels include the Grant County and Will Trent books, as well as the Edgar-nominated Cop Town and the instant New York Times bestselling novels Pretty Girls and The Good Daughter. Slaughter is the founder of the Save the Libraries project—a nonprofit organization established to support libraries and library programming. A native of Georgia, Karin Slaughter lives in Atlanta. Her standalone novels Pieces of Her, The Good Daughter and Cop Town are in development for film and television.- Library Journal

Early Praise for Pieces of Her:

“Her talent for writing convincingly flawed yet sympathetic characters is in high relief here…Readers will find themselves totally immersed in the suspenseful, alternating story lines and won’t want either of them to end.” – Booklist starred review

“Slaughter reinforces her place at the top of the thriller pack.” – Publishers Weekly

“With an intrigue and suspense-filled plot, Slaughter’s well-crafted, tense, and exhilarating story will keep readers on the edge of their seats.” – Library Journal

Slaughter has outdone herself with Pieces of Her – a novel that sets the standard for psychological thriller writing. Rarely in fiction have the past and the present collided with such force and in such a distinctive and compelling voice.” – Jeffrey Deaver

“Slaughter’s eye for detail and truth is unmatched…I’d follow her anywhere.” —Gillian Flynn

“Her characters, plot, and pacing are unrivaled among thriller writers…” —Michael Connelly

“One of the boldest thriller writers working today.” — Tess Gerritsen

“A writer of extraordinary talents. Every Karin Slaughter novel is a cause for celebration.” — Kathy Reichs

8 thoughts on “Spotlight: Pieces Of Her by Karin Slaughter”