Skip to content
HomeGood Luck With That by Kristan Higgins 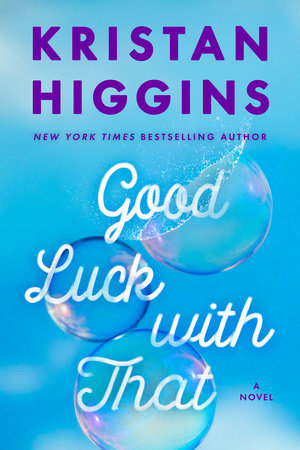 Thanks to NetGalley and Berkley for granting my request to read Good Luck With That.

I’ve dealt with weight issues most of my life. More like body image issues when I come to think of it. Having grown up in the sixties and seventies I wished I could look like the girls on tv sitcoms (Brady Bunch, Partridge Family, etc). Those girls were slim and had long straight center-parted hair and I was average shape with dark naturally curly hair that had a mind of its own. I remember the day the female freshman PE teacher weighed us and measured our height. I was 5’6 and weighed 120 lbs. I felt huge – so much taller and bigger than my classmates. Talk about poor self-image, huh? So that’s what I brought with me when I read Good Luck With That.

Kristan Higgins is on my trusted favorite authors list – meaning I’ll read whatever she writes. But this one was a tough read for me. It hit so close to home on a few levels. Not exactly though – because my mother wasn’t as purposely (cluelessly?) hurtful as Georgia’s. No, my mom was well-meaning and thought she offered positive encouragement. Sigh.

So this novel is about three friends who met at a camp for overweight teenage girls. They formed a bond that carried over into adulthood. As often happens after college they met less often and kind of lost track of one friend, Emerson, because she lived hours away. Sadly, their last time to meet is when she’s dying.

After Emerson’s funeral Marley and Georgia open an envelope containing the list they compiled at camp when they were seventeen. It’s a list of things they’ll do when they are skinny. Emerson has requested they do the things on the list and that leads them to examining their relationship with food, men, family, etc.

Good Luck With That is written in Higgins’ usual warm, emotional style. Her characters’ families drew laughs and winces from me. I loved seeing Georgia and Marley take more control of their issues and discover how empowering that control can be. Filled with (mostly) delightful and endearing secondary characters I have to say this novel grew on me. What started as a book I had to put down a few times in the beginning due to certain scenes and topics, I finished the second half in a few hours. I’m glad I had the chance to read it. I think it would be a good selection for book groups – there’s a reader’s guide at the end.

17 thoughts on “Good Luck With That by Kristan Higgins”