Skip to content
HomeSpotlight/Review: Our House by Louise Candlish 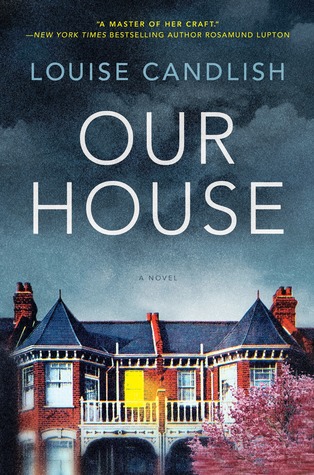 Our House by Louise Candlish

From an internationally acclaimed author, a disturbing and addictive novel of domestic suspense where secrets kept hidden from spouses cause shocking surprises that hit home…

There’s nothing unusual about a new family moving in at 91 Trinity Avenue. Except it’s her house. And she didn’t sell it.

When Fiona Lawson comes home to find strangers moving into her house, she’s sure there’s been a mistake. She and her estranged husband, Bram, have a modern coparenting arrangement: bird’s nest custody, where each parent spends a few nights a week with their two sons at the prized family home to maintain stability for their children. But the system built to protect their family ends up putting them in terrible jeopardy. In a domino effect of crimes and misdemeanors, the nest comes tumbling down.

Now Bram has disappeared and so have Fiona’s children. As events spiral well beyond her control, Fiona will discover just how many lies her husband was weaving and how little they truly knew each other. But Bram’s not the only one with things to hide, and some secrets are best kept to oneself, safe as houses.

My take:  Oh the tangled web that results when Bram and other key figures act out of selfish, nefarious concerns. This domestic suspense novel was a bit of an addictive read. Author Louise Candlish swept me along with the tony suburban setting and having one character reveal a part of the story via a crime podcast and another tell a part via a pdf. I alternated being appalled by their behavior and feeling some sympathy. Little by little, details were revealed and didn’t stop until the last page when I was left to wonder if there could be a sequel. In the end, I was a bit frustrated but also entertained.

Advance praise for Our House:

“The last line will make you literally shout with shock.” —Good Housekeeping

22 thoughts on “Spotlight/Review: Our House by Louise Candlish”