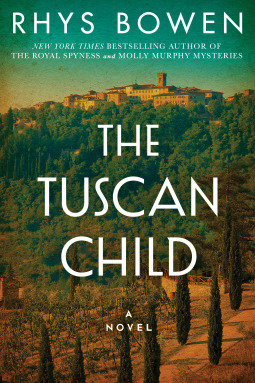 Description:  From New York Times bestselling author Rhys Bowen comes a haunting novel about a woman who braves her father’s hidden past to discover his secrets…

In 1944, British bomber pilot Hugo Langley parachuted from his stricken plane into the verdant fields of German-occupied Tuscany. Badly wounded, he found refuge in a ruined monastery and in the arms of Sofia Bartoli. But the love that kindled between them was shaken by an irreversible betrayal.

Nearly thirty years later, Hugo’s estranged daughter, Joanna, has returned home to the English countryside to arrange her father’s funeral. Among his personal effects is an unopened letter addressed to Sofia. In it is a startling revelation.

Still dealing with the emotional wounds of her own personal trauma, Joanna embarks on a healing journey to Tuscany to understand her father’s history—and maybe come to understand herself as well. Joanna soon discovers that some would prefer the past be left undisturbed, but she has come too far to let go of her father’s secrets now… (publisher)

My take:  The Tuscan Child is the story of two families who never would have met if not for WWII. Lord Hugo Langley’s plane was shot down over a tiny town in Tuscany. He was eventually discovered by a young woman from the town, Sophia Bartoli.

The story unfolds in a dual-timeline told from the perspectives of Lord Hugo and his daughter Joanna. I thought that worked well in the development of the plot. I liked the story well enough but I didn’t feel connected to the characters until the last few chapters. That could all be on me though so don’t let that dissuade you from reading the book.

The descriptions of Tuscany and the food especially are lovely. The mystery involving Lord Hugo and Sophia was interesting and all seemed to be solved at the end. I think readers who like the era of WWII in Italy and a story of survival against all odds will find The Tuscan Child an interesting novel.

Rhys Bowen is the New York Times bestselling author of over thirty mystery novels. Her work includes In Farleigh Field, a standalone novel of World War II; the Molly Murphy mysteries, set in 1900s New York City; the Royal Spyness novels, featuring a minor royal in 1930s England; and the Constable Evans mysteries about a police constable in contemporary Wales. Rhys’s works have won multiple Agatha, Anthony, and MacAvity awards. Her books have been translated into many languages, and she has fans from around the world, including the 12,000 who visit her Facebook page daily. She is a transplanted Brit who now divides her time between California and Arizona. Connect with her at rhysbowen.com.

“This well-crafted, thoroughly entertaining thriller from Agatha Award-winner Bowen follows the lives of three childhood friends…. Soon it’s a game of spy versus spy, and with every twist and turn, the reader is unsure whom to trust.”
—Publishers Weekly

“Rhys Bowen is one of the very best fiction writers of the day. With a deep understanding of the wounded human heart and an uncanny ability to capture the quiet emotions and the grand scale of war, she rises above her contemporaries. This is magnificently written and a must read.”

“This is a pitch-perfect book, which will charm you in one sentence, chill you in the next.” —Laura Lippman, winner of the Edgar, Shamus, Anthony and Agatha Awards

“A charming combination of history, mystery and romance.” —Kirkus Reviews

“Well written and fast paced, with a twist that will leave readers truly surprised. This novel is not to be missed.”
―RT Book Reviews

Other Titles by Rhys Bowen

9 thoughts on “The Tuscan Child by Rhys Bowen”

Bookfan is a personal blog written and edited by me. I don't accept any form of cash advertising, sponsorship, or paid topic insertions. I do accept books for review. My reviews are not influenced by that fact. The views and opinions expressed on this blog are purely my own or guest reviewers. To get your own policy, go to http://www.disclosurepolicy.org
Loading Comments...
Comment
×
<span>%d</span> bloggers like this: