Skip to content
HomeA Season to Lie by Emily Littlejohn 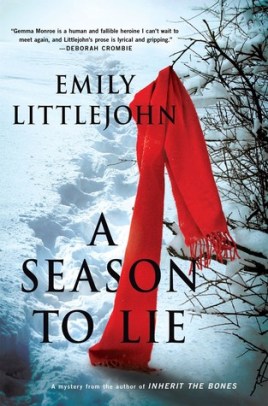 Description:  On a cold dark night in February, as a blizzard shrieks through Cedar Valley, police officer and new mother Gemma Monroe responds to an anonymous report of a prowler at the local private high school, The Valley Academy. In her idyllic Colorado small town, Gemma expects the call was just a prank by a bored teenager.

But there in the snow lies the savaged body of a man whose presence in town was meant to be a secret. And a disturbing message left by his killer promises more death to come.

Nothing is as it seems in Cedar Valley and stories, both fact and fiction, ensnare Gemma as her investigation moves from the halls of an elite academy to the forests that surround Cedar Valley.

Against a backdrop of bleak winter weather, stymied by those who would lie to protect what is dearest to them, Gemma hunts a ruthless killer before he strikes again in A Season to Lie.  (publisher)

My take:  Gemma Monroe, just returned from maternity leave, is very happy to be back at work at the Cedar Valley, CO police department. Her plan to ease back into a doable work schedule takes a turn when the body of a famous author is found at the town’s prestigious academy – in the middle of a blizzard. Tracking down the murderer will take up most of her time and energy. It doesn’t help that her boyfriend (and father of her child) is feeling a little stir-crazy being at home full-time. She’s feeling pressure from all sides.

I got a good sense of Gemma and her co-workers, family and other assorted characters despite jumping into the series on book 2. I enjoyed Emily Littlejohn’s style of telling a story and how she developed her characters. I liked what I read of the small Colorado, B-list ski town and want to learn more about it and the people who live there.  No shortage of red-herrings there and I thought any of them were plausible. That explains why I wasn’t shocked when Gemma discovered the murderer. There were a few loose threads involving those red herrings at the end of the novel that I hope will be carried into the next book in the series.

9 thoughts on “A Season to Lie by Emily Littlejohn”