Skip to content
HomeThe Summer That Made Us by Robyn Carr

Description:  Mothers and daughters, sisters and cousins, they lived for summers at the lake house until a tragic accident changed everything. The Summer That Made Us is an unforgettable story about a family learning to accept the past, to forgive and to love each other again.

For the Hempsteads, summers were idyllic. Two sisters who married two brothers and had three daughters each, the women would escape the city the moment school was out to gather at the family house on Lake Waseka. The lake was a magical place, a haven where they were happy and carefree. All of their problems drifted away as the days passed in sun-dappled contentment. Until the summer that changed everything.

After an accidental drowning turned the lake house into a site of tragedy and grief, it was closed up. For good. Torn apart, none of the Hempstead women speak of what happened that summer, and relationships between them are uneasy at best, hurtful at worst. But in the face of new challenges, one woman is determined to draw her family together again, and the only way that can happen is to return to the lake and face the truth. (publisher)

My take:  I love the way Robyn Carr tells a story. In this stand-alone novel we learn about the women of the Hempstead family:  mothers, sisters, daughters, cousins all spent their summers at their Minnesota lake house until a tragedy ended the tradition. That tragedy was the tipping point in most of their lives. Now one of the cousins is in the end stage of cancer and her one wish is for everyone to come back to the lake house. What will happen when everyone says yes to her invitation? The Summer That Made Us is a page-turner of a novel. I love stories about second chances. Each person who returned to the lake seemed to have earned that second chance but will the secrets and misunderstandings from decades earlier be explained and resolved? I enjoyed it all and recommend it to fans of Robyn Carr and stories about families.

About the author:  Robyn Carr is an award-winning, #1 New York Times bestselling author of more than 50 novels, including the critically acclaimed Virgin River and Thunder Point series, as well as highly praised women’s fiction titles such as Four Friends, What We Find, and The Life She Wants.

Robyn has won a RITA Award from the Romance Writers of America, and in 2016 she was awarded RWA’s Nora Roberts Lifetime Achievement Award for her contributions to the genre. Her novels have been translated into 19 languages in 30 countries.

Originally from Minnesota, Robyn now resides in Henderson, Nevada, with her aviator husband; they have two grown children. When she isn’t writing, Robyn puts her energy into community service: she has mentored a seniors’ memoir-writing group, attends book club chats in and out-of-state whenever possible, and is working with her local library on the Carr Chat Series, a program centered on fundraising and visiting author events that bring writers, their books, and the community together. 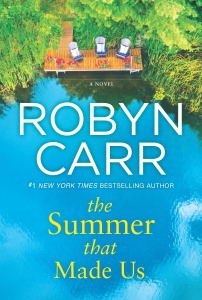 THE SUMMER THAT MADE US

16 thoughts on “The Summer That Made Us by Robyn Carr”