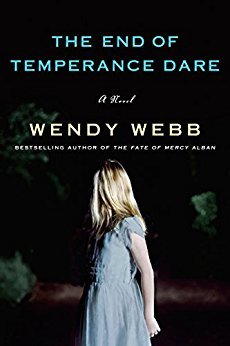 About:  Haunting and atmospheric, The End of Temperance Dare is another thrilling page-turner from the author reviewers are calling the Queen of the Northern Gothic.

When Eleanor Harper becomes the director of a renowned artists’ retreat, she knows nothing of Cliffside Manor’s dark past as a tuberculosis sanatorium, a “waiting room for death.” After years of covering murder and violence as a crime reporter, Eleanor hopes that being around artists and writers in this new job will be a peaceful retreat for her as much as for them.

But from her first fog-filled moments on the manor’s grounds, Eleanor is seized by a sense of impending doom and realizes there’s more to the institution than its reputation of being a haven for creativity. After the arrival of the new fellows―including the intriguing, handsome photographer Richard Banks―she begins to suspect that her predecessor chose the group with a dangerous purpose in mind. As the chilling mysteries of Cliffside Manor unravel and the eerie sins of the past are exposed, Eleanor must fight to save the fellows—and herself—from sinister forces. (publisher)

Praise for THE END OF TEMPERANCE DARE:

“[In] this solid supernatural thriller…Webb succeeds in escalating suspense while keeping her story grounded, but goes full-on Exorcist for the finale.” —Publishers Weekly

“Wendy Webb is a pro at providing all the trappings of a good Gothic mystery.…A fun read.” —Criminal Element

About the author:  Wendy Webb knew from the minute she read A Wrinkle in Time at age eleven that she was destined to be a writer. After two decades as a journalist, writing for varied publications including USA Today, the Huffington Post, the Star Tribune, Midwest Living, and others, Wendy wrote her first novel, The Tale of Halcyon Crane. When it won the 2011 Minnesota Book Award for genre fiction, she started writing fiction full-time. Her second and third novels, The Fate of Mercy Alban and The Vanishing, established her as a leading suspense novelist, who reviewers are calling the Queen of the Northern Gothic. She lives in Minneapolis with her part-time dog, Zeus, and is at work on her next novel. Visit her online at http://www.wendykwebb.com and on Facebook and Instagram as wendywebbauthor.