Description:  Self-educated and brown-skinned, Cassie works full-time in her grandmother’s laundry in rural Mississippi. Illiterate and white, Judith falls for “colored music” and dreams of life as a big city radio star. These teenaged girls are half-sisters. And when they catch wind of their wayward father’s inheritance coming down in Virginia, they hitch their hopes to a road trip together to claim what’s rightly theirs.

In an old junk car, with a frying pan, a ham, and a few dollars hidden in a shoe, they set off through the American Deep South of the 1950s, a bewitchingly beautiful landscape as well as one bedeviled by racial striving and violence. Absalom’s Daughters combines the buddy movie, the coming-of-age tale, and a dash of magical realism to enthrall and move us with an unforgettable, illuminating novel.  (publisher)

My take:  Cassie grew up with her mother (Lil Ma) and grandmother in a small Mississippi town. Their walls were papered with magazine pages and that’s how Cassie learned how to read.  One day she learned about her father – a man she’d never met. He was white and her grandmother, wanting a grandchild who could pass for white, had encouraged Lil Ma to let him father her child. But Grandmother’s idea didn’t work –  Cassie’s skin wasn’t light enough. When Cassie meets her father’s white daughter, Judith, the two form an initially uneasy alliance.

After a few years Judith finds out her father (who left his white family) is set to receive an inheritance. She’s going to find him, get some of his inheritance so she can go to New York City and become a star. Since Cassie is also his progeny she convinces her to come with Judith to make her claim. They set off on a road trip that was at times funny, frightening, and magical. The girls learn life lessons along the way – two being to never give up on your dreams and never forget the past.

While I liked the novel it seemed like a book that would be read in a high school literature class. Nothing wrong with that, just thought I’d mention my impression. I think readers in that age group would especially enjoy Absalom’s Daughters. 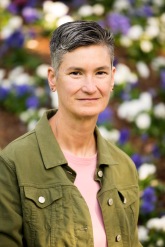 Suzanne Feldman, a recipient of the Missouri Review Jeffrey E. Smith Editors’ Prize and a finalist for the Bakeless Prize in fiction, holds an MA in fiction from Johns Hopkins University and a BFA in art from the Maryland Institute College of Art. She is the author of award-winning science fiction titles like Speaking Dreams and The Annunciate, published under the pen name Severna Park. Her short fiction has appeared in Narrative, The Missouri Review, Gargoyle, and other literary journals. She lives in Frederick, Maryland.