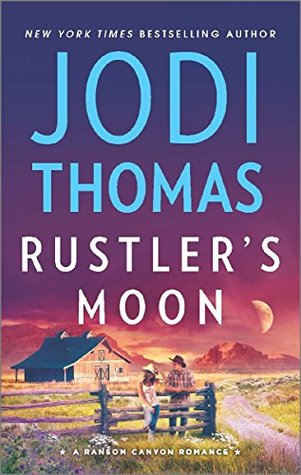 The setting for RUSTLER’S MOON is a ranch called the Devil’s Fork and a museum set on the edge of Ransom Canyon.  Since I grew up going to the Panhandle Plains Museum in Canyon, Texas, it was easy to build a museum in my mind.

I had one character, Carter, who really brought my museum and the canyon alive in my story.  In this second book of the RANSOM CANYON Series called RUSTLER’S MOON I wanted to add a mystery whispering through my story.

Carter’s long retired and comes to Crossroads, Texas, every summer to walk the canyon and search for a childhood memory.  One rainy night when Carter was five, he and his father found a cave that had drawings of stickmen on the walls.  Carter believes that if he’d fallen asleep they would have killed him.  The stickmen haunt him through Vietnam and in his nightmares for years.  He thinks he has to find them before he dies.

Angela Harold is running for her life after her father is killed.  She has no family she can trust and no close friends she wants involved.  Applying for a job as a curator for a small museum in Crossroads, Texas seems her only way out.  It was great fun bringing someone to Texas for the first time.  Angela is surprised how fast the whole community takes her in as one of their own. I loved the way this story wound around Angela’s mystery and the surprises Carter finds not only in the canyon, but within himself.

I love writing about the people in this place and Texas is my home.  I like watching how peoples’ lives bump into others and change their courses ever so slightly.

Come along with me to the adventure in RUSTLER’S MOON.  You might just fall in love again for the first time.

On a dirt road marked by haunting secrets, three strangers caught at life’s crossroads must decide what to sacrifice to protect their own agendas…and what they’re each willing to risk for love.

If there’s any place that can convince Angela Harrell to stop running, it’s Ransom Canyon. And if there’s any man who can reveal desires more deeply hidden than her every fear, it’s Wilkes Wagner. Beneath the rancher’s honorable exterior is something that just might keep her safe…or unwittingly put her in danger’s path.

With his dreams of leaving this small Texas town swallowed up by hard, dusty reality, all Wilkes has to show for his life is the Devil’s Fork Ranch. Though not one to let false hope seduce him, he can’t deny the quiet and cautious beauty who slips into his world and changes everything.

Lauren Brigman finally has freedom at her fingertips. All she needs is Lucas Reyes’s attention—a look, a touch, some sign that she’s more to him than a girl he rescued one dangerous night. But now it’s her turn to rescue someone, and the life-altering decision may cost her more than a chance with Lucas.

“Compelling and beautifully written, it is exactly the kind of heart­wrenching, emotional story one has come to expect from Jodi Thomas.” —Debbie Macomber, #1 New York Times bestselling author

Bookfan is a personal blog written and edited by me. I don't accept any form of cash advertising, sponsorship, or paid topic insertions. I do accept books for review. My reviews are not influenced by that fact. The views and opinions expressed on this blog are purely my own or guest reviewers. To get your own policy, go to http://www.disclosurepolicy.org
Loading Comments...
Comment
×
%d bloggers like this: