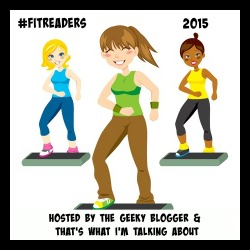 #FitReaders is hosted by  Geeky Bloggers Book Blog  and That’s What I’m Talking About.

I’m feeling much better and back to my normal walking. Thanks for all the good wishes the past few weeks.

Read on the treadmill (kindle) or outdoors (audio):

Synopsis:  There’s nothing like a wedding! The joy, the fun, the memories—the stress. As a wedding planner, Anne Richardson has seen mothers of the bride turn into Momzillas, and she’s determined not to do that when it’s her daughter’s turn to get married. But once Laney gets engaged, all bets are off. Anne becomes obsessed with giving Laney the perfect wedding she herself never had. And that wedding needs to be held in Icicle Falls at Primrose Haus, the perfect setting.

Roberta Gilbert, owner of Primrose Haus, has been hosting events at her charming Victorian for thirty years. She’s an expert on weddings, but not on mother-daughter relations. When her daughter, Daphne, comes home and decides to help with the business, the receptions become truly memorable—and not in a good way. Then there’s the added complication of Roberta’s gardener, who seems more interested in Daphne than he is in planting primroses…

Tying the knot is a business that has everyone tied up in knots!  (publisher)

My take:  Our daughter was married a few months ago so I knew I wanted to read the newest book in the Icicle Falls series: A Wedding on Primrose Street by Sheila Roberts.

I thought Roberts nailed the dynamics that can arise between mothers and daughters, event planners and mothers-of-the-bride, and husbands and wives when planning a wedding. In her typical style Roberts had me alternately laughing and cringing as the events drew near. What I liked most was how, when they stopped to take a breath, the characters tried their hardest to remember what was most important about the happy day and the people involved.

There are several bridal shower and wedding recipes included at the end as well as a fun epilogue of sorts. I enjoyed it and look forward to the next Icicle Falls book.

I found The Coincidence of Coconut Cake to be a charming story that fans of chick lit and foodie fiction will probably enjoy as much as I did. Being from Wisconsin I also enjoyed the Milwaukee spots that Amy E. Reichert described in detail. Yes, I’m a fan of squeaky cheese 🙂

Reichert’s characters are relatable and I bought the misunderstanding between the two principal characters. Their relationship developed slowly and I was invested in their story. There are interesting and sweet supporting characters that added to the emotional aspect of the novel.

I’m craving all kinds of comfort food after reading this novel. It began with the luscious cake on the cover and progressed from there. Recommended.

#FitReaders is hosted by  Geeky Bloggers Book Blog  and That’s What I’m Talking About.

Since Hadleigh, Melody and Bex—the best of best friends—entered into a marriage pact, two of them have found (and married) the men of their hearts. But Bex doesn’t think she’ll be as fortunate as the others. Her own first love died years ago in a faraway war, and Bex has lost hope for a happy marriage of her own. She concentrates on her business, a successful chain of fitness clubs, instead.

Then, when single father Tate Calder comes to Mustang Creek with his two sons in tow, who befriend Bex’s eight-year-old nephew, she and the handsome, aloof newcomer are constantly thrown together. But is the marriage season over? Or can a man with doubts about love be the right husband for a woman who wants it all?  (publisher)

My take:  This is the story of two people who need to learn to love again. Bex’s fiancé was killed at war years earlier and Tate’s first wife died unexpectedly from an illness leaving him with two young sons.

Bex is the third of three friends who made a pact to find their true loves. One of the friends, a jewelry maker, made them each a bracelet with a charm that would bring luck to the woman who wears it. Two of the friends have found their love and now it’s time for Bex.

I thought The Marriage Season was a sweet story. I liked the family theme and selflessness of the two principal characters. All in all, a very satisfying addition to the Brides of Bliss County series. Recommended to fans of the author and contemporary, small town romance.

Bookfan is a personal blog written and edited by me. I don't accept any form of cash advertising, sponsorship, or paid topic insertions. I do accept books for review. My reviews are not influenced by that fact. The views and opinions expressed on this blog are purely my own or guest reviewers. To get your own policy, go to http://www.disclosurepolicy.org
Bookfan
Blog at WordPress.com.