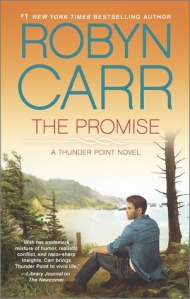 My take:  Robyn Carr takes us back to Thunder Point, Oregon and this time Scott Grant, the small town’s doctor, is the main character. When his wife died after their second child was born he decided to move to Thunder Point because it would be more conducive to raising his children – and he wanted to practice medicine in a small, underserved community. Four years of living in the small town has proven his decision a good one. The only thing he needs is someone to work alongside him at the clinic – someone  who’s willing to work for almost no pay. When Peyton Lacoumette walks in the door and then agrees to give the job three months he can’t believe his good luck.

Scott and Peyton’s story was so enjoyable. They’re not perfect but together, at work and after work, their relationship was real and so sweet. The scenes at home with the kids tugged at my heartstrings. Scott would do anything for Peyton. After her previous relationship with another doctor ended terribly she’s not so sure she can start a new one with yet another doctor. And what will happen when the previous doctor shows up at Scott and Peyton’s office asking for a second chance?

As I’ve come to expect from Carr, The Promise is an emotional story filled with love, heartache, and hope. I enjoyed it and look forward to the next book in the series. Recommended to fans of Robyn Carr, the Thunder Point series, and small town contemporary romance.