The Fever by Megan Abbott

National bestselling author Wendy Wax teams with Tampa musicians Ian and Evan Koteles of 10th Concession to write and produce The Mermaid in You, inspired by her new novel The House on Mermaid Point.

Wendy Wax didn’t set out to be a songwriter, but William Hightower, the leading man in her new work of contemporary women’s fiction, THE HOUSE ON MERMAID POINT, wouldn’t let her rest until she did. The character, an aging, down on his luck southern rock legend, just didn’t seem complete until his famous ballad, Mermaid in You, was written and produced. “It turned out that creatively, even though the book was off to the publisher, I wasn’t quite finished with Will. Once I gave him the song of his lost love, he was whole.”

Wendy, who admittedly can’t carry a tune, reached out to musically inclined relatives for advice on her lyrics and was rewarded with a Google link on song writing.  As she was about to give up an Atlanta friend recommended her professional musician sons, Ian and Evan Koteles whose popular group 10th Concession performs at venues throughout Florida and much of the southeast.  Wendy, who lives in Atlanta and Ian and Evan, based in Tampa, teamed up and collaborated long-distance. Lyrics were tweaked, music was written and beginning Wednesday, June 25th Mermaid in You is officially available as an MP3 download, free in the first three months following the July 1st release of THE HOUSE ON MERMAID POINT. 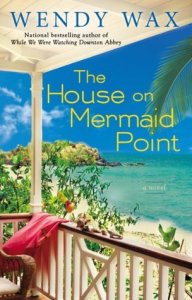