Skip to content
HomeThat Part Was True by Deborah McKinlay 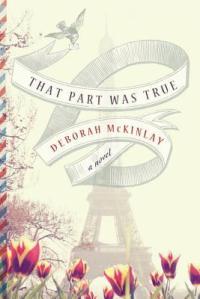 Synopsis:  When Eve Petworth writes to Jackson Cooper to praise a scene in one of his books, they discover a mutual love of cookery and food. Their friendship blossoms against the backdrop of Jackson’s colorful, but ultimately unsatisfying, love-life and Eve’s tense relationship with her soon-to-be married daughter. As each of them offers, from behind the veils of semi-anonymity and distance, wise and increasingly affectionate counsel to the other, they both begin to confront their problems and plan a celebratory meeting in Paris–a meeting that Eve fears can never happen.

My take:  Early on in my reading of this slim novel I wondered where it all was going and how would it end. I mention that because I found the end to be quite satisfying even though it was rather unexpected.

Being in the same age group (50ish) I could relate a bit to both Jack and Eve. That made the reading all the more enjoyable. Jack is grappling with why he can’t get a relationship right. Eve is dealing with her deep shyness (and something bordering on agoraphobia) that has shown itself in public recently leading to panic attacks.

I loved how the two counseled each other as they discussed cooking in their brief letters. I smiled often while reading the letters.

I’m not sure what more to reveal except to say that I’m glad I read That Part Was True. For readers who enjoy recipes included in novels like this, there are a few.

9 thoughts on “That Part Was True by Deborah McKinlay”