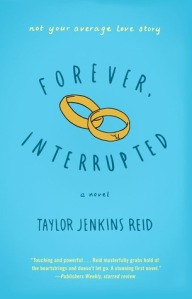 Synopsis:  Elsie Porter is an average twentysomething and yet what happens to her is anything but ordinary. On a rainy New Year’s Day, she heads out to pick up a pizza for one. She isn’t expecting to see anyone else in the shop, much less the adorable and charming Ben Ross. Their chemistry is instant and electric. Ben cannot even wait twenty-four hours before asking to see her again. Within weeks, the two are head over heels in love. By May, they’ve eloped.

Only nine days later, Ben is out riding his bike when he is hit by a truck and killed on impact. Elsie hears the sirens outside her apartment, but by the time she gets downstairs, he has already been whisked off to the emergency room. At the hospital, she must face Susan, the mother-in-law she has never met—and who doesn’t even know Elsie exists.

Interweaving Elsie and Ben’s charmed romance with Elsie and Susan’s healing process, Forever, Interrupted will remind you that there’s more than one way to find a happy ending. (publisher)

My take:  This novel is a study of grief – the grief of a young woman when her husband dies suddenly and that of the young man’s mother, a widow herself.

Elsie narrates the novel. She tells the story by shifting from six months earlier, where we learn how she fell in love with Ben, to the time after his death. It was impossible for me to read this novel without that pain in the chest one gets when feeling really sad. And this is a sad story. It’s also funny, charming and believable.

I don’t want you to get the impression that this novel is a big downer – it’s not. Case in point: Elsie is a librarian. There’s an elderly man who comes into the library every day. He and Elsie go from casual acquaintances to emotional confidants – their scenes were among my favorites in the novel. Truly touching.

I think Taylor Jenkins Reid was spot on in conveying the grief of Elsie and Susan. If you need a good cry, read this book. If you want to read a novel that leaves you uplifted and with a sense of hope, you should read Forever, Interrupted.