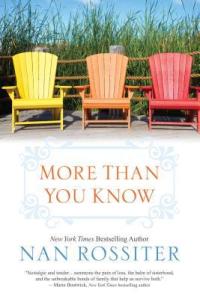 Synopsis:  Losing her father on the night she was born could have torn Beryl Graham’s family apart. Instead, it knitted them together. Under their mother’s steady guidance, Beryl and her older sisters, Isak and Rumer, shared a childhood filled with happiness. But now Mia Graham has passed away after battling Alzheimer’s, and her three daughters return to their New Hampshire home to say goodbye.
Swept up in memories and funeral preparations, the sisters catch up on each other’s lives. Rumer and Isak have both known recent heartache, while Beryl has given up hope of marriage. But surprising revelations abound, especially when they uncover Mia’s handwritten memoir. In it are secrets they never guessed at–clandestine romance, passionate dreams, joy and guilt. And as Beryl, Rumer, and Isak face a future without her, they realize it’s never too late to heed a mother’s lessons–about taking chances, keeping faith, and loving in spite of the risks… (back cover)

My take:  When the three Graham sisters come together to prepare for their mother’s funeral they find out things they never new about her – shocking things. She left a memoir that told them everything and gave them a new perspective of her life. She raised her three daughters alone after a car crash took the life of her husband on the night of their 5th anniversary. They thought she never remarried because she couldn’t imagine loving anyone else but their father. Her memoir tells them the real story.

Though dismayed by what they’ve learned, they take to heart the lesson to never take life for granted and to appreciate especially the mundane events of everyday life. Timely advice because all three are at crossroads in their personal lives.

More Than You Know is a novel of faith and family that will resonate with many readers. I enjoyed it.

*Note:  At the end of the novel Nan Rossiter shared a couple of recipes made by the Graham sisters. I’ve made copies and plan to try both!