Skip to content
HomeSpotlight on: And Then I Found You by Patti Callahan Henry 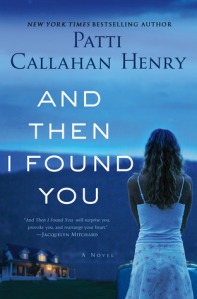 Twenty-two years ago, New York Times bestselling author, Patti Callahan Henry’s sister placed a baby girl for adoption. Then in April 2010, a Facebook request put an end to all the waiting and wondering. Patti’s sister’s daughter had found her.

Henry’s latest novel, AND THEN I FOUND YOU, coming this April 2013, is a unique story inspired by Henry’s personal family history with adoption.  The novel, much like the true story, is a compelling narrative of love lost, love found, and a miraculous reunion that changed everyone’s lives forever.

Told from the points of view of birth mother, Kate Vaughn, and her thirteen year-old daughter Emily, AND THEN I FOUND YOU (St. Martin’s Press; Hardcover; April 9, 2013; 272 pp.) spans over twenty years and follows the characters as they move through their lives in South Carolina, Arizona, Alabama and New York.  Now thirty-four years old, Kate seems finally ready to begin her life with someone else, but memories keep holding her back.  In her wish to conquer her painful past, Kate decides to visit Jack, the father of the baby she placed for adoption many years before.  Their reunion and an unexpected Facebook request starts a chain reaction that will change not only Kate’s life, but that of her loved ones too. AND THEN I FOUND YOU is ultimately a story about brave choices, our yearning for certainty and the courage it takes to find our place in the world.

Patti Callahan Henry is a New York Times Bestselling novelist. She has published nine novels (Losing the Moon, Where the

River Runs, When Light Breaks, Between the Tides, The Art of Keeping Secrets, and Driftwood Summer, The Perfect Love Song, Coming up for Air and the upcoming And Then I Found You –April 2013, St. Martins Press). Patti has been hailed as a fresh new voice in southern fiction, appearing in numerous magazines (Good Housekeeping; SKIRT; The South; Southern Living, etc..). She has been short-listed for the Townsend Prize for Fiction. She has been nominated four different times for the Southeastern Independent Booksellers Fiction Novel of the Year. Her work is published in five languages and all novels are on Brilliance Audio.  Two of her novels were OKRA picks and Coming up For Air was an Indie Next choice. Patti is a frequent speaker at fundraisers, library events and book festivals, discussing the importance of storytelling. Her next novel, AND THEN I FOUND YOU, will be released on April, 9th, 2013 by St. Martins Press. Patti Callahan Henry is a full time writer, wife and mother of three living in Mountain Brook, AL.

19 thoughts on “Spotlight on: And Then I Found You by Patti Callahan Henry”