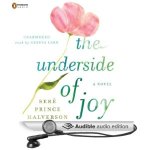 Synopsis (publisher): To Ella Beene, happiness means living in the Northern California river town of Elbow with her husband, Joe, and his two young children. Yet one summer day, Joe breaks his own rule – never turn your back on the ocean – and a sleeper wave strikes him down, drowning not only the man but his many secrets.

For three years, Ella has been the only mother the kids have known and has believed that their biological mother, Paige, abandoned them. But when Paige shows up at the funeral, intent on reclaiming the children, Ella soon realizes there may be more to Paige and Joe’s story. “Ella’s the best thing that’s happened to this family,” say her close-knit Italian-American in-laws, for generations the proprietors of a local market. But their devotion quickly falters when the custody fight between mother and stepmother urgently and powerfully collides with Ella’s quest for truth.

The Underside of Joy is not a fairy-tale version of stepmotherhood pitting good Ella against evil Paige, but an exploration of the complex relationship of two mothers. Their conflict uncovers a map of scars-both physical and emotional-to the families’ deeply buried tragedies, including Italian internment camps during World War II and postpartum psychosis.

Weaving a rich fictional tapestry abundantly alive with the glorious natural beauty of the novel’s setting, Halverson is a captivating guide through the flora and fauna of human emotion-grief and anger, shame and forgiveness, happiness and its shadow complement . . . the underside of joy.

My take:  I listened to The Underside of Joy in three days. Halverson’s characters, story, and setting pulled me in and kept me listening for long stretches of time. I knit while I listen and I’m much further along on my current project than I expected to be because of this book!

The story is told from Ella’s point of view so it was easy to understand her perspective. What I didn’t expect was to be able to sympathize with Paige. Halverson reveals backstory of the two women (as well as supporting characters) throughout the novel. Little by little I realized my impressions of several characters had shifted. I don’t want to risk a spoiler so I won’t say more – except that I ended up wondering if I could resolve things as Ella and Paige had. For that reason I think this would be a good book club selection.

I really enjoyed Halverson’s descriptions of the various locations in and around the small California town. I could easily visualize the forest of towering Redwoods, for example, and wished I could experience it in person. I thought her writing was beautiful and look forward to her next book.

Geneva Carr did a fine job with the narration. Honestly, along with the compelling story, she’s one of the reasons I found it so difficult to stop listening. She became Ella. I’ll be looking for more of her audiobooks.