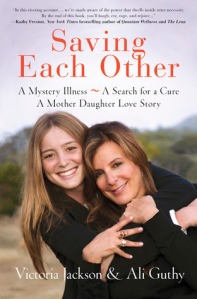 (Book flap synopsis) On the surface, Victoria Jackson is the American Dream personified: from a troubled childhood and unfinished high school education she overcame immeasurable odds to create a cosmetics empire valued at more than half a billion dollars. Married to Bill Guthy—self-made principal of infomercial marketing giant Guthy-Renker—Victoria’s most treasured role was mother to three beautiful, beloved children, Evan, Ali, and Jackson.

Suddenly, Victoria’s dream life is broken as she begins to battle a mother’s greatest fear. In 2008, her daughter, Ali, began experiencing unusual symptoms of blurred vision and an ache in her eye. Her test results led to the diagnosis of a disease so rare, the chance that she had it was only 2%. Neuromyeltis Optica (NMO) is a little understood, incurable, and often fatal autoimmune disease that can cause blindness, paralysis, and life-threatening seizures, and afflicts as few as 20,000 people in the world. At the age of 14, Ali was given a terrifying prognosis of between four to six years to live.

Saving Each Other begins just as Victoria and Bill learn of Ali’s disease, starting them on a powerful journey to save Ali, their only daughter, including bringing together a team of more than fifty of the world’s leading experts in autoimmune and
NMO-related diseases to create the Guthy-Jackson Charitable Foundation.

Told in alternating viewpoints, Victoria and Ali narrate their very different journeys of coming to terms with the lack of control that neither mother nor daughter have over NMO, and their pioneering efforts and courage to take their fight to a global level.

Bringing their story to light with raw emotion, humor, warmth, and refreshing candor, Saving Each Other is the extraordinary journey of a mother and daughter who demonstrate how the power of love can transcend our greatest fears, while at the same time battling to find a cure for the incurable.

My take:  As a parent of a child who has an autoimmune disease I was very interested in reading Saving Each Other. I’d never heard of NMO before but now feel I have a general understanding of it. That’s mostly due to the format used by Jackson and Guthy. Written in diary form it was easy to understand their feelings as they were introduced to the disease at the time of Ali’s initial attack. I could relate to their search for medical help that would actually help. I was in awe of how quickly the family started a foundation that would make a cure for NMO it’s focus.

Victoria Jackson was the major force behind making things happen even while fighting anxiety and other issues. Bill Guthy was “the funder”.  And Ali just wanted to be a normal high school kid – play tennis, be with friends, anything but be a poster child for NMO.

As memoirs go I found Saving Each Other fascinating. Yes, the family had means to seek the best treatment for their child but they also shared the knowledge gained through their search. The GJCF (Guthy Jackson Charitable Foundation) continues to work for a cure of NMO.