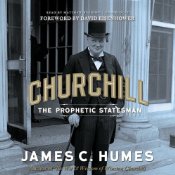 Synopsis: (Publisher) Churchill: The Prophetic Statesman reveals the astonishingly accurate predictions of Britain’s most famous prime minister and how his critics’ perceptions of them shaped his political career. Who could have foreseen the start of World War I twenty-five years before the assassination of a Serbian archduke plunged Europe into war? Who could have predicted the rise of al-Qaeda nearly eight decades before anyone had heard of Osama bin Laden? Winston Churchill did. Now for the first time, bestselling author James C. Humes reveals these and other shocking predictions made by this legendary figure. Churchill didn’t need a crystal ball to tell the future. Using his skills as a historian, he studied patterns of the past to make his eerily accurate forecasts, including the rise of European fascism, the fall of the Iron Curtain, and the exact day of his own death as he entered his final years. In fascinating detail, Humes’ astonishing biography documents the spot-on prophecies Churchill foretold and the political consequences he endured for sharing them.

My take: If you are a fan of Churchill you’ll want to read or listen to this book. It would also be a great gift! I found it interesting as well as informative – both on a level that forced a “Wow!” out of me from time to time. Although I enjoyed listening to the book I would recommend also reading the print book. I had to stop and ‘rewind’ more than a few times to get the full gist of what had just been said. If I’d been reading the actual book there would have been a lot of highlighting involved.

That said, I thought narrator Matthew Brenher did a wonderful job with James C. Humes’ book. His Churchill voice was  very good and fit perfectly into the narrative of each passage.

I find myself wanting to read more about Churchill and I see that Mr. Humes has written a few more so I’ll add them to my TBR list. Recommended.

Source: I purchased the audiobook.