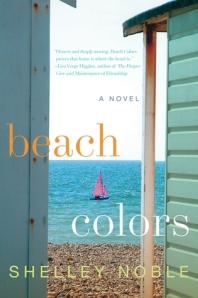 My take:  With nowhere else to go, Margaux Sullivan returns to her family summer home at the shore at Crescent Cove, CT. She’s lost everything to her snake of a husband – their NYC apartment; her successful fashion design business; the bank accounts; their marriage.
As she tries to figure out how to move forward she reconnects with people from her past – people she grew up with during the summers. One in particular is Nick Prescott. Although she doesn’t recall knowing him as a girl he remembers everything about her – at least what he knew from afar as he never spoke to her back then. There’s a world of difference when one is 14 and the other 18 and when one is a summer person and the other a townie. But now, both in their 30s, he’d like to really get to know her.
Nick is the polar opposite of Margaux’s ex. He gave up his dream job of history professor to come home and take care of his mom and nephew. Nick feels responsible for what happened to his brother so he does the upstanding thing where his family is concerned. Margaux has no intention of starting a relationship but she finds Nick irresistible on a few levels. Her main focus though is finding her love of design again and making her mark with a new clothing line. But will she find happiness and contentment if the NY fashion scene takes notice?
There are several characters dealing with issues in Beach Colors. I can see that this could be the start of a series. I wonder… Anyway, I enjoyed them all. Seriously, Linda the hairstylist (and a recent NYC transplant) was a hoot as well as a godsend to the women of Crescent Cove! I would definitely like to read more about the secondary characters in future books.
My one quibble with the book is the abrupt ending. I wanted to see it play out a little more. But, overall, I really liked Beach Colors and recommend it to anyone who enjoys books about women reinventing themselves. It’s a very fast read and would be a good choice to take along on vacation.

Disclosure:  I received a review copy from the publisher via LibraryThing Early Reviewers. I was not compensated for my review.