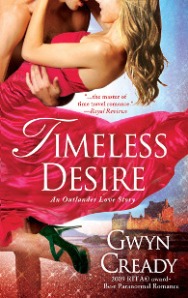 Synopsis:  Two years after losing her husband, overworked librarian Panna Kennedy battles to distract herself from crushing grief, while she wrestles with yet another library budget cut.  During a routine search within the library’s lower levels, Panna opens an obscure, pad-locked door and finds herself transported to the magnificent, book-filled quarters of a handsome, eighteenth-century Englishman. She soon recognizes the man as Colonel John Bridgewater, the historic English war hero whose larger-than-life statue loomed over her desk.

However, the life of the dashing Bridgewater is not at all what she imagined. He’s under house arrest for betraying England, and now looks upon her—a beautiful and unexpected half-dressed visitor—as a possible spy. Despite bad first impressions (on both sides), Bridgewater nonetheless warms to Panna, and pulls her into his escape—while both their hearts pull the other headlong into their soul-stirring secrets.

Very quickly Panna is thrown into a whirlwind of high-stakes intrigue that sweeps her from Hadrian’s Wall to a forbidding stone castle in Scotland.  And somewhere in the outland, Panna must decide if her loyalties lie with her dead husband, or with the man whose life now depends on her.

My take:  I hope you read the synopsis and that it made you want to read this book as much as I did! I really enjoyed Timeless Desire. It’s filled with adventure, conflict, humor and romance. Gwyn Cready’s heroine – Panna, short for Pandora – has come through an emotional time. As you’d expect, her husband’s illness and death took a lot out of her. It’s been a few years and she’s not sure she’ll ever be ready to get back in the dating pool. But fate has other plans for her.

Panna finds herself (see synopsis) in 1706 England and Scotland during border conflicts that pit clans against the Queen’s army. She also finds the man whose statue she has looked at every day at work for years! Or is it? And if it is will he donate a few books to Panna’s library and give their budget a boost? I loved that Panna is a librarian. It was a fun aspect to the novel.

The romance between Panna and Jamie is reminiscent of Diana Gabaldon’s Clare and Jamie of Outlander fame. But they are unique as well. Panna and Jamie have emotional hurts that have changed their lives. As they begin to trust each other and share their secrets they form a bond that could be unbreakable.

Recommended to fans of Time Travel and Romance. This is my first time reading a book by Gwyn Cready. I look forward to reading her backlist.

Disclosure:  I received an eBook for review from the publicist. I was not compensated for my review. See disclosure policy in sidebar.

includingTumbling Through Time, Seducing Mr. Darcy, Flirting with Forever, Aching for Always and A Novel Seduction.

Highly regarded by her fans and peers, Gwyn has been called, “the master of time travel romance,” and her writing described as “sexy,” “delightfully original” and “wickedly witty.”  Timeless Desire is her latest foray into the time travel genre and men in kilts.  She still finds both eminently satisfying.

Gwyn lives in Pittsburgh with her family.