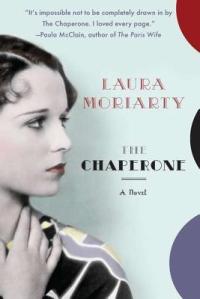 My take:  In the summer of 1922 Cora Carlisle agreed to chaperone fifteen-year-old Louise Brook from Kansas to New York City where she would study dance for one month with two prominent instructors. One would think this novel might be about Louise but it’s definitely Cora’s story. There is a reason she was so willing to chaperone Louise. As the story unfolds we learn a lot about Cora. The novel, and Cora’s life, really take off in New York.

She would owe this understanding to her time in New York, and even more to Louise. That’s what spending time with the young can do – it’s the big payoff for all the pain. The young can exasperate, of course, and frighten, and condescend, and insult, and cut you with their still unrounded edges. But they can also drag you, as you protest and scold and try to pull away, right up to the window of the future, and even push you through.

The Chaperone is an interesting story that spans Cora’s life – a style of novel that appeals to me. Given her start in life it was easy to sympathize with her. But I also liked her pluck. She refused to let Louise steamroll over her. She also knew if things were going to happen in her life she had to assert herself. And that she did!

I loved Elizabeth McGovern’s performance. She just seemed the perfect person to voice the 1920s characters – maybe because I’m a fan of Downton Abbey. I listened to the audio while reading the print edition. I’m finding that combination really works for some books. Although the audio would be great on its own I enjoyed reading along.

Source:  I bought the audiobook and the book.