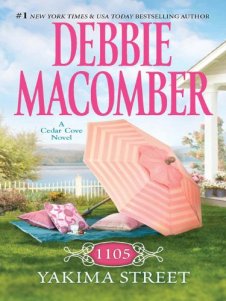 About:  As with each Cedar Cove novel, the reader is updated with a note from one of the main characters. This note is from Bruce:

You’ve probably heard that my wife has left me. Rachel’s pregnant, and she says she can’t handle the stress in our household anymore. My thirteen–year–old daughter, Jolene, is jealous of her. Maybe it’s my fault. As a widower I spoiled her—

Jolene was reading over my shoulder just now and says that’s not true. She claims Rachel ruined everything. But that’s not true. The real question is: How can I get my wife back? I don’t even know where she is. She’s not with Teri Polgar or any of her other friends from the salon. The other question is…when will Jolene grow up and stop acting like such a brat?

Of course, I’m not the only one in town with problems. Linc Wyse’s father–in–law is trying to destroy his business. And you know Charlotte Rhodes? Seems she’s becoming forgetful, and the family’s worried about her and Ben. Lots of other stuff going on—but Rachel is better at keeping up with it than I am.

If you have any idea where my wife is, give me a call. Please.

My brief take:  I’ve enjoyed the Cedar Cove series and  1105 Yakima Street is no exception. As Debbie Macomber’s small town series winds down (there’s still one more book) she ties up a few story lines started in previous books.

A few thoughts: I wondered how the Rachel, Bruce and Jolene problems would be resolved but, happily, they are.  Linc Wyse lives up to his surname and solves some issues in his wife’s family. It was hard to see a beloved character like Charlotte Rhodes begin to decline. It’s something many readers will relate to. One of my favorite story lines in this book was that of Gloria and Chad. Life has changed for them both and the future is theirs to decide.

If you’re like me and have kept up with the series you’ll want to read 1105 Yakima Street. If Cedar Cove is new to you – well, you’re in for a treat. Begin with the first: 16 Lighthouse Road. It’s the start of a heartwarming series. I’m glad there’s another book to read before the series ends and I’m happy to report that Debbie Macomber has a new series in the works.