Skip to content
HomeComing Up For Air by Patti Callahan Henry 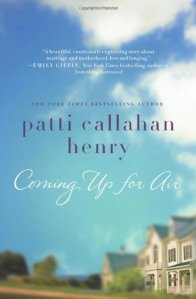 Title:  Coming Up For Air

About:  (from the Goodreads synopsis) Ellie Calvin is caught in a dying marriage, and she knows this. With her beloved daughter away at college and a growing gap between her and her husband – between her reality and the woman she wants to be – she doesn’t quite seem to fit into her own life.

But everything changes after her controlling mother, Lillian, passes away. Ellie’s world turns upside down when she sees her ex-boyfriend, Hutch, at her mother’s funeral and learns that he is in charge of a documentary that involved Lillian before her death. He wants answers to questions that Ellie’s not sure she can face, until, in the painful midst of going through her mother’s things, she discovers a hidden diary – and a window onto stories buried long ago.

The setting is lush and, for the most part, the characters are endearing. Characters and plot aside, I think my favorite part of the novel was learning about a jubilee – that time when conditions are right and sea life come up for air. It served as a metaphor for Ellie’s life and her journey.

This is a book I think many women, especially women who’ve married and raised a family, will understand. I’m not saying it’s every woman’s story but there are emotions and aspects that I believe many of us can relate to. I’ve found that to be true  with most of Patti Callahan Henry’s novels and that’s why I’m a fan.

18 thoughts on “Coming Up For Air by Patti Callahan Henry”