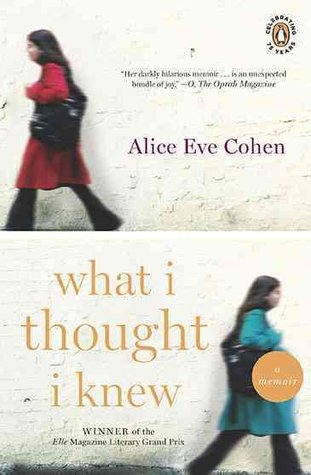 Title: What I Thought I Knew

About: (Back of the book) Alice Cohen was happy for the first time in years.  After a difficult divorce, she had a new love in her life, she was raising a beloved adopted daughter, and her career was blossoming.  Then, she started experiencing mysterious symptoms.  After months of tests, X-rays, and inconclusive diagnoses, Alice was sent for an emergency CAT scan that revealed the truth:  she was six months pregnant.

Thoughts: This slim memoir is informational as well as inspirational.  Ms. Cohen’s story is shocking and she seems to hold nothing back.  Told with honesty and humor, the matter-of-fact style makes reading about the difficulties in this part of her life easier than one might expect – although there was one instance that was extremely hard for me to read.

I liked the occasional use of a list, a re-cap of sorts, that seems to remind the author as well as the reader what has happened to that point.  It’s a clever device.

The author is fortunate to have loved ones (older daughter and husband) who raised the bar when it comes to patience and unconditional love and support.  They are truly special.

I can only hope that what happened to Ms. Cohen doesn’t occur often.  However, I have a feeling it does so her book serves as a cautionary tale to everyone with the lesson being: trust your gut instinct.  If what you’re being told doesn’t feel/sound right, keep seeking answers.

Recommend? Yes, to fans of memoirs.

About the author:
Alice Eve Cohen is a solo theatre artist, playwright, and memoirist. Her memoir, What I Thought I Knew (Viking, 2009) won the Elle’s Lettres 2009 Grand Prix for Nonfiction. She has written for Nickelodeon, PBS, and CBS. Her plays have been presented at theatres throughout the country, and she has toured her solo theatre works internationally. Her writing about arts in education has been published in nine languages. The recipient of fellowships and grants from the New York State Council on the Arts and the National Endowment for the Arts, she holds a BA from Princeton University and an MFA from The New School. She teaches at The New School in New York City.