Skip to content
HomeSafe From The Sea by Peter Geye

Title: Safe From The Sea

About: (from the book blurb) Set against the powerful lakeshore landscape of northern Minnesota, Safe from the Sea is a heartfelt novel in which a son returns home to reconnect with his estranged and dying father thirty-five years after the tragic wreck of a Great Lakes ore boat that the father only partially survived and that has divided them emotionally ever since. When his father for the first time finally tells the story of the horrific disaster he has carried with him so long, it leads the two men to reconsider each other. Meanwhile, Noah’s own struggle to make a life with an absent father has found its real reward in his relationship with his sagacious wife, Natalie, whose complications with infertility issues have marked her husband’s life in ways he only fully realizes as the reconciliation with his father takes shape.

Thoughts: Peter Geye’s debut novel is one of the best I’ve read in a long time.   Conflict between father and son is nothing new but the reason behind Geye’s characters’ estrangement is heartbreaking and tragic.  Noah’s understanding of his father is rooted in his childhood version.  He believes that what he knows of his father from growing up with and without him is the truth.  And on the surface it is. But there’s another side to the story – his father’s side.  Noah and his father give each other a last gift of truth and understanding –  the story of before and after the disaster on Lake Superior.  In doing so they are both free to move forward.

Geye’s wonderful description of the Lake Superior shore, the ore boat Ragnarøk, and the family cabin pulled me into the novel.  He tells a riveting story of not only an epic storm but also of people whose lives were forever changed.

Source:  LTER – I also bought a copy at the author’s signing/reading event at my local indie bookshop.

Recommend? Yes.  This is one that I expect to reread and will stay in my personal library. 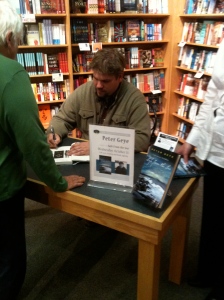 Author of Safe From The Sea

13 thoughts on “Safe From The Sea by Peter Geye”