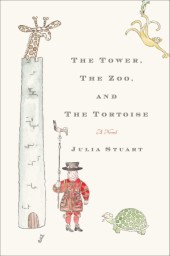 The Tower, The Zoo, and The Tortoise is about Balthazar Jones who is a Beefeater – he lives and works at the Tower of London.  Balthazar and his wife Hebe are trying to go on with life after the death of their only child.  She works at the London Underground’s Lost Property Office where she tries to reunite lost objects with the owners and Balthazar leads tours at the Tower.  One day, it is announced that the Queen’s menagerie (gifts of animals from other countries) will be housed at the Tower and Balthazar will be in charge.  This sets in motion a string of hilarious events that had me laughing out loud.

There are supporting characters who are quite lonely.  At the same time they add to the comedy with their quirks:  the Reverend Drew whose other job would shock his parishioners; Valerie, Hebe’s coworker, who has a propensity for trying on/out found objects; and Ruby the pregnant barmaid who has a fondness for rats.  All of Stuart’s characters shine in their own way and add a great deal to the plot.

I learned a lot about the Tower of London.  Facts and trivia are interspersed throughout the novel in an easy flow that makes me want to read more about the famous inhabitants since the eleventh century.

The gentle pace, the wonderful characters, and the humorous events of the novel make for an enjoyable afternoon of reading.  The Tower, The Zoo, and The Tortoise is a gem.