“There are two kinds of people in this world: the ones who don’t cook out of and have NEVER cooked out of THE I HATE TO COOK BOOK, and the other kind…The I HATE TO COOK people consist mainly of those who find other things more interesting and less fattening, and so they do it as seldom as possible. Today there is an Annual Culinary Olympics, with hundreds of cooks from many countries ardently competing. But we who hate to cook have had our own Olympics for years, seeing who can get out of the kitchen the fastest and stay out the longest.” – Peg Bracken

Philosopher’s Chowder. Skinny Meatloaf. Fat Man’s Shrimp. Immediate Fudge Cake. These are just a few of the beloved recipes from Peg Bracken’s classic I HATE TO COOK BOOK. Written in a time when women were expected to have full, delicious meals on the table for their families every night, Peg Bracken offered women who didn’t revel in this obligation an alternative: quick, simple meals that took minimal effort but would still satisfy.

50 years later, times have certainly changed – but the appeal of THE I HATE TO COOK BOOK hasn’t.

This book is for everyone, men and women alike, who wants to get from cooking hour to cocktail hour in as little time as possible.

I remember hearing buzz about The I Hate To Cook Book when I was a teen.  At the time I wondered why a cookbook would be titled as such but fast-forward a couple of decades and I was trying to figure out what to make for dinner for my family on a daily basis.  Looking back I wish I had Peg Bracken’s book in those days.

When I had a chance to review the 50th Anniversary edition of The I Hate To Cook Book I grabbed it.  Author Peg Bracken died in 2007 so her daughter Jo wrote the forward that tells about her mom and the book.  Following the forward is Peg’s introduction where she explained how and why the book came about. Bracken’s wit is apparent throughout the book making it an enjoyable read as well as a go-to reference.

Many of the recipes seemed familiar to me (maybe my mom had this book?).  They use ingredients found in most pantries such as cream of mushroom soup, canned vegetables, fruits, tuna, etc. The recipe directions are easy to follow.   Saturday Chicken (p.20-21) earned a thumbs up at my house.  (I added a small can of mushrooms to the recipe) 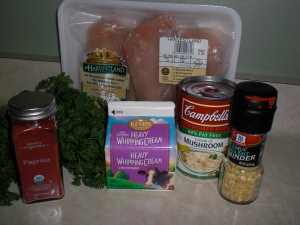 Take your chicken and salt and garlic salt it a bit, then paprika it thoroughly.  Next, spread it out, in one layer, in a shallow baking pan.  Dilute the soup with the cream, pour it over the chicken, and sprinkle the chopped parsley prettily on top.  Bake it, uncovered, at 350 for one and a half hours.

Fresh out of the oven

The chapters cover pretty much any type of dinner situation: Potluck Suppers; Company’s Coming; Luncheon for the Girls; Little Kids’ Parties.  Also included are helpful hints, equivalents, and substitutions.  I think The I Hate to Cook Book would be a great addition to any cookbook collection.