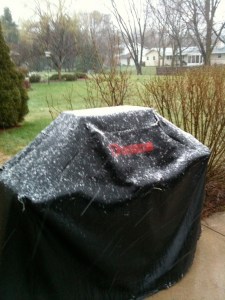 Snow was falling on Thursday morning. Happily, it didn’t last!

The forsythia is starting to bloom
Books Read/Reviewed last week:
Get Lucky
Kill Me Twice

a meme by That’s A Novel Idea
now hosted by Jenners at Find Your Next Book Here
1. Book title:
Kill Me Twice by Roxanne St. Claire
2. Words that describe the book:
Romantic Suspense
3. Settings or characters:
* Miami
* Jasmine Adams – identical twin sister of the missing news anchor Jessica Adams
* Alex Romero – Member of elite security company called The Bullet Catchers, hired to protect Jessica Adams
4. Things I liked/disliked about the book:
* I liked the mystery/suspense
* I liked the main characters but wished there was a little more back story on each. Maybe that is revealed in the books that follow this first in the series.
* I liked the pace and the action. It was a fast read.
* I liked that I didn’t know the outcome (even though I thought I did!)
5. Stars or less: 3.5 stars

Alex Romero is the hottest “Bullet Catcher” in the business. Tall, dark, and deadly if necessary, this high-priced bodyguard’s got the muscle and the moves — especially when it comes to the ladies. Alex can keep his beautiful clients out of danger, but sometimes they can’t keep their hands off of him. Now Alex has one last chance to prove he belongs among the elite force known as The Bullet Catchers, but his assignment is stacked…against him.

Private investigator Jasmine Adams is fiercely independent and fearless under pressure — she doesn’t need some hunk-for-hire’s help to catch the creep stalking her twin sister. But when Jazz uncovers bigger forces targeting her sister for death, she’s glad to have Alex’s brain and brawn handy. From the steamy streets of Miami to the sultry beaches of Key West, Alex and Jazz try to fight temptation as they race to keep a madman from fulfilling his promise to kill not just once, but twice. And some temptations are too powerful to resist….

Sarah Harper not so accidentally sends a risqué email to her entire company and gets shown the door. She winds up in a last row seat next to an old boyfriend on a plane bound for Houston, her hometown. She stays with her sister Mackie who is also her best friend. Mackie and her husband Clive have tried to have children for years but pregnancy has always ended in miscarriage. Sarah makes an offer that is second only to donating an organ – she offers to be a surrogate. It’s the first part of her plan to make a difference in life, to do more than create successful ad campaigns to sell bras.

Coming home to Houston also presents Sarah with the opportunity to work through a few things from her past: the death of her mother when she was only twelve; the horrible way she broke up with the old boyfriend. She also faces the situation of her father being engaged to Dixie who is completely different from her mother.

As in Everyone Is Beautiful, Katherine Center writes believable characters. Sarah and Mackie reminded me of my relationship with my sisters. We can love them or be mad at them but don’t anyone else say a bad word about them! They would do anything for each other. I really enjoyed Sarah’s perspective as she dealt with her post New York life – how she dealt (or didn’t deal) with pregnancy, being jobless, and being relationship-less. I also loved Dixie. There is a scene involving Dixie and Sarah at a self-defense class that had me laughing out loud. But Dixie becomes much more than a wacky step-mother and is more a person who can shine a light on what is important in life.

I’m not sure if Get Lucky would be considered Women’s Fiction or Chick Lit but I do know if you’re looking for a thoughtful and enjoyable novel about a young woman seeking a happier, more meaningful life, you should read Get Lucky.

Raven Stole the Moon by Garth Stein (from Staci at Life In The Thumb)
The Moon Looked Down by Dorothy Garlock (from Crystal at My Reading Room)
On The Steamy Side by Louisa Edwards (from the author who also sent a cute apron and 2 spatulas!)
Happy Easter to all who celebrate
Books read/reviewed last week:
The Season of Second Chances
On Chesil Beach
Waiting on Wednesday pick:
Lois Lane Tells All

Kaye won my copy of The Season of Second Chances (arc)

a meme by That’s A Novel Idea
now hosted by Jenners at Find Your Next Book Here
1. Book title:
On Chesil Beach by Ian McEwan
2. Words that describe the book:
Life-changing misunderstandings
3. Settings or characters:
* Edward
* Florence
* England
4. Things I liked/disliked about the book:
* I love McEwan’s spare writing.
* I like the way the characters’ back stories are revealed and the similarities they unknowingly share.
* I’m intrigued by a novel about two people whose lives are forever changed by one misunderstanding.
* I liked the audiobook.
5. Stars or less: 4 stars.

From Goodreads:
It is 1962 when Edward and Florence, 23 and 22 respectively, marry and repair to a hotel on the Dorset coast for their honeymoon. They are both virgins, both apprehensive about what’s next and in Florence’s case, utterly and blindly terrified and repelled by the little she knows.

McEwan is the master of the defining moment, that place and time when, once it has taken place, nothing will ever be the same after it. It does not go well and Florence flees the room. “As she understood it, there were no words to name what had happened, there existed no shared language in which two sane adults could describe such events to each other.” Edward eventually follows her and they have a poignant and painful conversation where accusations are made, ugly things are said and roads are taken from which, in the case of these two, the way back cannot be found. Late in Edward’s life he realizes: “Love and patience–if only he had them both at once–would surely have seen them both through.” This beautifully told sad story could have been conceived and written only by Ian McEwan. –Valerie Ryan

Congratulations
Kaye
winner of
The Season of Second Chances