From the back of the book: Frances Mayes – widely published poet, gourmet cook, and travel writer – opens the door to a wondrous new world when she buys and restores an abandoned villa in the spectacular Tuscan countryside. In sensuous and evocative language, she brings the reader along as she discovers the beauty and simplicity of life in Italy.
Having only seen previews years ago for the film version of this book, I was expecting a different book. Under the Tuscan Sun could be considered a “how to” manual for the person who wants to live in an Italian village a few months each year – in a home that has needed to be almost completely rebuilt. Not many readers would probably be up to the task if faced with the same challenges as Mayes and her partner Ed. Let me tell you, Frances was very lucky to have Ed in her life. Seems like nothing was too much for him to face. We should all have an Ed! I love my husband but he’s not the best handyman. I’d hire Ed in a second and pay him whatever he asked if he could cross all the items off my to-do list. There were usually professional contractors and tradesmen heading up the work, but Ed was always a willing participant and did a lot of work.
Mayes also takes us along on day trips and mini-vacations through Tuscany. We tour numerous Etruscan ruins. There are a couple of chapters covering recipes using seasonal ingredients. I enjoyed the chapter on harvesting their olives to be made into their own personal oil. They found it delicious – who wouldn’t?! And if I didn’t have a garden I’d want to shop in the Cortona market. Oh, I’d shop there anyway. It seems you could find almost anything you need, food or otherwise. Another chapter was about celebrating Christmas in Cortona. That sounds like my kind of Christmas.
Over all, I found the book surprisingly interesting and even entertaining in spots. There were a couple of chapters that I found unnecessary. I look forward to watching the movie version.

I want to thank Maggie for hosting the 2008 Southern Reading Challenge. I really enjoyed the three books I chose and will continue to look for books by Southern authors.

I began with The Blue Star by Tony Earley. It is the sequel to Jim the Boy – the story of a young boy growing up in the 30s/40s with his Mother and Uncles. Just a lovely book.

Next up was Garden Spells, the magical story of learning to forgive and trust again. I’ll be reading Sarah Addison Allen’s next book The Sugar Queen very soon.

I finished the Challenge with Carl Hiaasen’s The Downhill Lie. This is the first Hiaasen book I’ve read. He’s a very funny man. I need to read some of his fiction.
Thanks to all of the Challenge participants I now have a very long TBR list. Maggie, I’ll be watching for the 2009 Challenge!

From the back of the book: Bella Shaughnessy is addicted to lipstick with names like My Chihuahua Bites and Kiss My Lips, an occupational hazard, since she works at Salon de Paolo, her family-run beauty salon, along with her four half-brothers and sisters. The owner is her father, Lucky Shaughnessy, a gregarious, three-times divorced charmer with Donald Trump hair who is obsessed with all things Italian. After Bella’s own marriage flames out spectacularly when her half-sister runs off with her husband, Bella decides she has seen enough of the damage love can do. She makes a vow: no more men.
Well, Bella didn’t plan on meeting a nice and handsome entrepreneur named Sean Ryan. Try as she might, she can’t keep him out of her life – especially since he has been instrumental in getting her exciting new project off the ground. This is a very light book filled to the brim with a loud, loving family and one very cute dog. Bella finds out that not all men are evil and some are even worthy of forgiveness. Add this to your list of books to read at the beach.

Summer By the Sea (Susan Wiggs) is the story of a 2nd chance at a 1st love. This is the perfect beach read – or in my case, the perfect pretend you’re at the beach read. An extra surprise (and I see this more and more) were the recipes. I recommend this book!

Summer People (Elin Hilderbrand) is the story of a grieving family who retreat to their Nantucket summer home after the death of the husband. I just didn’t get into this book. I thought it had potential but it just left me wondering why it wasn’t a better story. I preferred Barefoot (published in 2007).

Back of the book: Doug Parker is a widower at age twenty-nine, and in his quiet town that makes him something of a minor celebrity – and the object of sympathy, curiosity, and, in some cases, even unbridled desire. But Doug has more urgent things on his mind, such as his sixteen-year-old stepson, Russ, a once-sweet kid who now is getting into increasingly serious trouble on a daily basis. As Doug starts dipping his toes into the shark-infested waters of the second-time-around dating scene, it isn’t long before his new life is spinning hopelessly out of control, cutting a harrowing and often hilarious swath of sexual missteps and escalating chaos across a suburban landscape.
I wasn’t surprised to read that this book has been optioned for a movie. It read like an entertaining script full of colorful characters such as Doug’s potty-mouthed twin sister who just happens to be separated from her husband and expecting their first child. She moves in with Doug and his stepson. She manages to start Doug on the road to living again. I thought the author did a good job portraying the grief felt by a young husband and son when the wife/mother dies so unexpectedly. This is NOT a tear-filled Terms of Endearment kind of book. There are laugh out loud moments as well as astonishingly poignant ones. I hope the movie comes close to the book.

From the book flap: In this humorous and poignant novel, Edward Hardy explores the depths of modern love, parenthood, and compromise. Keeper and Kid is the story of how a normal guy receives an unexpected gift and in turn must learn to ask more of others and himself. A coming-of-age story for the guy who thought he had already grown up, Keeper and Kid is a sharp and witty account of what we do for love.
James Keeper is moving happily through life in Providence working at a job he enjoys and living with the woman he loves (but won’t marry). Then, one day, he gets a call to come to a hospital in Boston – and that changes pretty much everything.
I almost gave up on this one. Really, I felt so annoyed through most of it. But I hate to quit after reading half a book. So I kept going. It was ok. I didn’t love it but felt better about ‘things’ when I finished it. If you decide to read it, please let me know your thoughts. I’m curious. For now I’ll just return it to the library.

From the back of the book: In the aftermath of the Iranian revolution, rare-gem dealer Isaac Amin is arrested, wrongly accused of being a spy. Terrified by his disappearance, his family must reconcile a new world of cruelty and chaos with the collapse of everything they have known. As Isaac navigates the terrors of prison, and his wife feverishly searches for him, his children struggle with the realization that their family may soon be forced to embark on a journey of incalculable danger.
I read this book for a discussion later this month. Sofer writes from personal experience. Her family fled Iran in the early 80s after her father was released from prison (he was wrongly accused of being a spy). She writes smoothly – making it a bit easier for the reader to take in the horrible details of a tumultuous time. That said, she didn’t make it an “us against them” story. Yes, it is apparent who the enemy was but perspectives of both sides are presented.
The Amin’s son Parviz was sent to the US to avoid being drafted into the war. Their daughter Shirin is 10 years old. Once word is out at school that her father is imprisoned she finds herself almost friendless. Farnaz, Isaac’s wife, worries that she can’t take care of her daughter. She’s overwhelmed trying to figure out what to do about her husband. She doesn’t know who can be trusted – even their housekeeper (who has worked for the family for many years) is acting differently toward Farnaz and Shirin.
The story moves quickly after Isaac’s release from prison. Isaac realizes he must get his family out of the country. Sofer takes us on the journey. I recommend the book. I’d like to read a sequel to this story.
I found the P.S. section quite interesting. Included are articles about the author, the book, and some author recommendations of books about Iran and other favorites.

Wishing everyone a happy and safe 4th of July

The back of the book pretty much explains it all:
When Lena Fleet went to college, she promised God she would stop fornicating with every boy she met, never tell another lie and never, ever go back to her hometown in Alabama. All she wanted from Him in return was to make sure the body was never found…
Ten years later, Lena’s demons are catching up with her. Her high school arch-enemy is looking for the golden-haired god who disappeared during their senior year. Her African-American boyfriend has given her an ultimatum : introduce him to the lily-white family she left behind, or he’s gone.
While she’d rather burn up in a fire than let him meet steel magnolia Aunt Florence and the rest of her eccentric, racist family, Lena knows it is time to head home and confront her past once and for all…
* * * * * *
While the alternating chapters of the present and the past isn’t usually my favorite format, I found Jackson made it work. Her writing and storytelling are so smooth. I really enjoyed this book.

I’ve been away for a few days. My nephew was married last Saturday in San Antonio. The reception was held at a downtown building (21st floor). That’s where I took this photo. 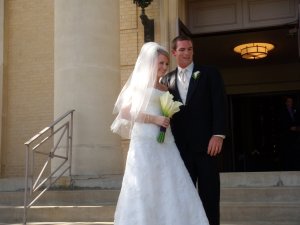 Congratulations and Best Wishes to Dan and Ashley!